Woman wants to get resume off her chest 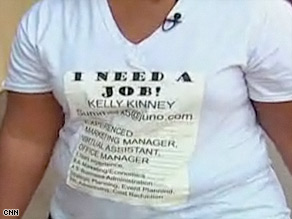 Kelly Kinney began wearing her resume after seeing someone with a T-shirt that read "Unemployed."

"Publicity is something I have always been good at and basically, the name of the game is how you can get noticed, how you can distinguish yourself from everybody else," she said.

Kinney moved to Valencia, California, about a year ago as her company in Dayton, Ohio, downsized. She worked remotely for her old employer until October, and has been looking for a full-time position for more than a year now, but says she can't even get in the door for an interview.

Since mid-September, she's been applying to an average of 40 jobs a day, but, she said, "it just sort of feels like my resume is going into a giant stack with everybody else's."

The unemployment rate in the Los Angeles area was at 8.2 percent for October, according to the Bureau of Labor Statistics. A check of employment Web sites found about 10,000 listings for marketing jobs in Southern California. iReport.com: Are you looking for a job?

Potential employers have often told her she is one of 500 other applicants.

"It's extremely frustrating," Kinney said. "You get to the point where you say, 'What is going on? What else can I be doing?' "

About a week ago, after seeing a guy wearing a T-shirt that read "Unemployed," she decided to take the idea a step further and put her resume on the front of her shirt and a cover letter on the back. The credentials on the white T-shirt are listed below a boldface heading: "I NEED A JOB!"

Kinney said she chooses coffee bars and intersections because they are places where she can find a captive audience -- prospective employers stuck waiting for lattes or red lights.

Some people have called her "gimmick" really clever; others ask if she feels ashamed, she said.

Kinney is tenacious. While the T-shirt idea is her latest promotion, she also posted her resume on her car window and sent postcards to potential employers -- all in the hope one will believe in her.

She said she has had offers. One was pulled after the employer said they thought she was over-qualified, she said.

She rejected a marketing assistant position paying about California's $8-an-hour minimum wage, because the pay was too low.

Her husband does have a job, but one salary is not enough to cover the high cost of living in California for a family of three, she said. And it has eaten into their reserves.

"We had savings set aside for a down payment on a house, and we have had to go through that -- it's to the point where we have nothing left."

Her 10-year-old son's dreams of being an Olympic gymnast may even be lost.

Her son Jaelin practices gymnastics 22 hours a week, and is a straight-A student, his mother said.

"I am going to have to go to my son and tell him, 'I know you have put your life into this, but I can no longer pay for it.' "

But she pledges to keep wearing her T-shirt -- and to keep innovating if that doesn't work.

"I have a couple of things in mind," she said. "It will be something no one else has done before."

All About Unemployment Rate • Los Angeles