Dating don'ts -- how NOT to kiss

(The Frisky) -- Locking lips. Making out. Smooching. Kissing. It sounds so pleasant and easy, yet do a little research and you'll soon discover that while everyone may be doing it, few are doing it well.

For your edification, I have rounded up the different varieties of bad kissers and broken them down by the traits they share with members of the animal kingdom: 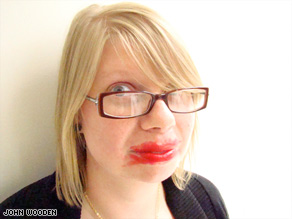 A "Venus Flytrap" kisser can cover your nose and mouth and make it hard to breathe.

Iguana: Characterized by cool, dry lips, and a tiny pink tongue, Lizard Lips is about as arousing as, well, a small reptile crawling around your mouth. One victim noted, "He'd dart his tongue in and out at a million flicks per second. Kissing is supposed to get you hot, not give you calluses."

The Excitable Puppy: I don't know who is telling these boys that there's nothing hotter than a mid-makeout tongue bath, but I heard from a lot of sopping sisters. "He licked from forehead to nose to chin and back again," is how one woman described her first kiss. "Like the way my 80-pound Labrador licks my face. Even though it was my first makeout sesh, I knew my companion was cursed with bad skills."

The Rattlesnake: You know the scenario. . . he's cute, you're tipsy and so you lean in lay one on him and, BAM! His tongue is halfway down your throat, pulsing like a piston. "The tongue should flick lightly -- not thrust like a video on BET," instructs Victoria, a filmmaker who knows her way around a liplock.

The Tasmanian Devil: I was on the fence about one guy I was dating until we had our first makeout. His kiss was like being set upon by a team of angry ferrets. A sensuous bite on the neck can be hot, but a series of sharp nips to the jawline, decidedly less so.

The Venus Flytrap: "It was like his neck was on a hinge," Sarah relays over cocktails. "This gave him the ability to open his mouth about six inches." I dated one of these too --his mouth would open so wide that he'd cover my mouth and nose, making it impossible to breathe. And yes, while I realize the Venus Flytrap is not technically an animal, it eats bugs and that's good enough for me.

The Skunk: The breath of death was listed as a kiss-killer by most people surveyed. "In my mind I said let me give you the number of my gastroenterologist, or at least a mint!" David shared via email. In reality he said nothing to the offender -- he simply never called her again. "I'm a very polite person," he explained.

The Possum: As you should know, there is more to kissing than just shoving your tongue in and letting it lay there. "The unfurling of the tongue, and then not moving it . . . " Sarah shudders, too horrified to go on. "Too much tongue is the number one component of a bad kiss," she continues. "When it fills your mouth and you feel like some cheap bologna sandwich has been stuffed in there -- that is the ultimate bummer."

Kangal Fish: Used in exotic pedicures to nibble away the dead skin on your feet and hands, the KF-style smooch is also quite cleansing. "I had a woman do this odd thing where she ran the tip of her tongue along the face of my teeth, as if she was trying to clean them," shares David, obviously on a roll.

Sarah has also experienced this, and was neither amused nor aroused. "It reminded me of those cheesy Pearl Drops toothpaste commercials from the '70s."

Judy McGuire is the author of "How Not to Date" (Sasquatch Books), and for the past eight years, has been writing a funny sex and love advice column called "Dategirl" for the "Seattle Weekly."