STRATFORD, Connecticut (CNN) -- When Cappie and Don Perras saw their stock market investments tank this year, they decided to tighten their belts. They drive fuel efficient cars around their Connecticut town and eat at cheaper restaurants if they eat out at all. To avoid impulse buying, they avoid the mall. And for now, at least, they've put away the credit cards. 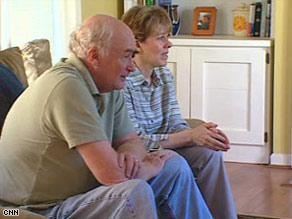 Like many Americans, the Perrases rarely use their credit cards anymore.

This marks a big change from their old attitude.

"I felt secure with my credit cards like, 'Oh well, I always have my credit cards,' " says Cappie Perras, a special education teacher. "Now I feel like, it's almost like there's a big caution sign in front of the credit card, 'Do Not Use, Only In Case of Emergency,' " she adds.

The Perrases are examples of a trend building among middle-income and middle-aged consumers to cut back on credit card use, according to a new study by Javelin Strategy & Research, a financial research firm. Forty percent of consumers surveyed said they're pulling out their credit cards less than they were at the beginning of the year.

Don Perras, a college professor approaching retirement age, says the family has stopped using cards, except for rare instances like booking hotel rooms on the road. Instead, the couple uses their debit cards.

The aim: to soon be free of credit card debt.

"It would be a top priority," Don Perras said.

But with the high cost of living, the Perrases are having trouble making a dent in their $8,000 credit card balance.

The Perras family has plenty of company. Americans carry approximately $961.8 billion in revolving debt, according to the Federal Reserve Board. Delinquency rates on credit cards are at the highest levels since the end of 2002.

Even as consumers cut back on using credit cards, they're finding it harder to pay down their balances, says Javelin President James Van Dyke.

"In some cases they're out of work or perhaps their wages have been cut back, or maybe they had a variable rate which they have to pay more for than ever before," Van Dyke said. When people use their credit cards less, "this changes what goes on in the industry because credit card companies typically make a lot of their money on the fees they charge merchants."

"Credit card companies are running a bit scared right now, and for good reason, because people are having a difficult time paying off their balances; and everyday consumers, they're cutting into their purchases right now -- both luxury goods and even the basic necessities," Van Dyke says.

According to the Javelin study, nearly 70 percent of financial institutions say they have cut back on credit card solicitations. Six of 10 say they are limiting the amount of credit offered to customers.

James Chessen, chief economist for the American Bankers Association, says the industry is well prepared for the economic downturn. "It's all a matter of managing that risk, because you know the volume will be off, you know the economy is riskier today than it was a year ago. So you naturally take that into account so you have the capacity to come out of this even stronger than you came into it," he added.

For Cappie Perras, being stronger means cutting back on plastic. "I don't feel good about the credit cards," she says. "I regret that we got into so much credit card debt."