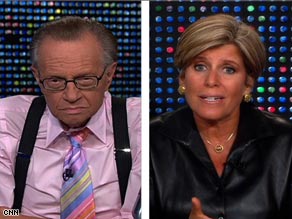 The federal government decided to intervene after determining a failure of the company, whose financial dealings stretch around the world, could hurt the already delicate markets and the economy.

Personal finance expert Suze Orman appeared on "Larry King Live" on Tuesday to discuss what the AIG bailout means to you and how safe is your money during this economic downturn. The following is an edited version of the interview:

Larry King: A few months ago, you said on this very show that you would be worried if there was another big government bailout. It's now happening. Should the government be helping AIG?

Suze Orman: Well, in this particular case, I have to tell you they should. Bear Stearns, very different. Lehman, very different. AIG is an international giant that just doesn't have ramifications here in the United States. It is worldwide. They're like in 130 countries. They have 100,000 employees. Everybody has an AIG insurance policy. So in this particular case, my opinion, thank God, they bailed out AIG.

King: What about Barclays and Lehman?

Orman: They're selling Neuberger Berman to Barclays, that's fine. That will all work itself out. The major danger that we had here, which is why you saw the stock markets go up today, is that rumors were circulating that AIG was going to be saved. The big downfall would have been if AIG, in my opinion, had gone under.

King: Sen. McCain is saying this involves fraud -- or let me use another word similar to fraud -- on Wall Street. Do you agree?

Orman: It starts way back when there was nobody overseeing and regulating. Nothing. It's how many times have I said on this program, what were they all thinking? Why were they lending money to people who shouldn't have been borrowing money? Why were they packaging these things? What about the rating agencies? Why weren't the rating agencies rating everything the way they should have been and now they're making matters worse? So whether it's fraud or not, was there deceit going on? I don't know if it was deceit as much as just total irresponsibility is what caused this.

King: Is this a good time to get into the market?

Orman: No. It's not a good time to get in with brand-new money. I would let these markets kind of wash themselves out. On the other hand, if you're investing in a 401k every month with small amounts of money, that's OK as long as you don't need the money for 10, 15, 20 years. If you just got an inheritance and you have $50,000, should you be putting it in the stock market now? Are you kidding? These are the markets that you just sit on the sidelines and wait on the sidelines and stay away from them until everything works out. iReport.com: Are you worried about the Wall Street crisis?

King: Oil settled down today to $91.15 a barrel. What does that mean? Are gas prices going to go down?

Orman: Yes. Gas prices probably will go down, I hope, to essentially $3 a gallon. What you're essentially seeing here is like a tax rebate for everybody. That's a lot of people that will help them a lot. Lehman, AIG -- I get that's all bad news, but the good news is for the main people that have to get by every single day. Your gas bills, in terms of what you put in your cars, aren't going to be as high. Your heating bills aren't going to be as high. To go from $150 a barrel down to $91, that's significant.

Orman: I personally think it was bad. Listen, the banks in the United States of America are in trouble. Anything we can do, in my opinion, to help the banking system so they can make a little bit more money, I think, would have been a good idea. If we had lowered interest rates, the Fed funds rate, the banks would have been making more money on the money that they lent out, which would be helping everybody in the long run. So I think they should have lowered, but they left the same.

King: Could other major financial institutions go under?

Orman: Absolutely, they can. You would think that they couldn't, but when you see dinosaurs -- Merrill Lynch, Lehman Brothers, AIG -- going down the drain, anything can happen. Nothing is beyond the imagination at this point in time.