To improve your marriage -- be quiet

(OPRAH.com) -- Forget everything you've heard about frankness, sharing your feelings, getting him to express his. New research into the male mind makes it clear that discussion may be the fastest way to shut down communication. (Oh, you noticed that, have you?) 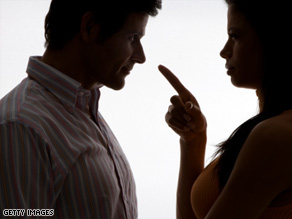 When I first heard about the book, I thought it was a gimmick. "How to Improve Your Marriage Without Talking About It" sounded like a title somebody's prankster husband dreamed up after a rocky couples' therapy session.

When I mentioned it to Hugh, my own husband -- who in 22 years of marriage has never once said, "Honey, we need to talk" -- his face lit up like the Fourth of July.

Needless to say, I was suspicious. What about the vast repertoire of communication skills women have spent decades perfecting? Were Patricia Love and Steven Stosny, the psychotherapists who co-authored the book, advising us to forget everything we've learned and rethink how we relate to our partners?

The answer is yes -- and they're not kidding.

"The number one myth about relationships is that talking helps. The truth is, more often than not, it makes things worse," says Love, a tall, lean redhead with a down-home Texas twang and a generous smile. She is co-founder of the Austin Family Institute and leads workshops around the country when she isn't making television appearances or co-writing books, including the best-selling "Hot Monogamy."

"Talking about feelings, which is soothing to women, makes men physically uncomfortable," says Stosny, the Maryland-based author of "You Don't Have to Take It Anymore" and an expert on male aggression. "There's literally more blood flow to their muscles. They get fidgety, and women think they're not listening."

We're relaxing in the sunroom of my house in Washington, D.C., on a golden autumn morning. I learn that it was Stosny's research into the core emotional differences between the sexes that radically altered his thinking, as well as the way he works with clients. When he shared his findings with his friend and colleague Pat Love, they rang true to her, even though they flew in the face of the verbal problem-solving approach she'd been using for 30 years.

According to Stosny's analysis of several hundred human and animal studies, male and female responses to stress are distinct from birth.

"When a baby girl hears a loud noise or gets anxious, she wants to make eye contact with someone, but a baby boy will react to the same sound by looking around, in a fight-or-flight response," he says. What's more, while newborn girls are much more easily frightened, boys have five times as many "startle" reactions, which are emotionally neutral but pump up adrenaline. Boys need to intermittently withdraw into themselves to keep from becoming overstimulated.

These differences hold true for most social animals and correlate with our biological roles: The female's fear response is an early warning system that serves to detect threats and alert the males of the pack to danger.

As girls grow, they go beyond needing eye contact and refine a coping strategy identified by UCLA psychologists as "tend and befriend." If there's a conflict, girls and women want to talk about it.

Boys and men, however, need to pull away. A man's greatest suffering, Stosny says, comes from the shame he feels when he doesn't measure up -- which is why discussing relationship problems (i.e., what he's doing wrong) offers about as much comfort as sleeping on a bed of nails. Oprah.com: Men and women ... what makes us so different?

So, I wonder, does this explain why, when I reach out and tell Hugh I'm feeling isolated from him -- on the assumption that this will foster closeness -- he gets defensive or withdraws? Do my verbal attempts to re-establish intimacy make him feel inadequate? Is that why he gets that glazed look in his eye and is suddenly compelled to watch men tossing balls on TV?

Yes, yes, and yes, replies Love. And our responses aren't all in our heads. When a man feels shamed by a woman's criticism, his body is flooded with cortisol, a stress hormone with an effect that is decidedly unpleasant.

A woman experiences a similar cortisol rush whenever her husband shouts at her, ignores her, or otherwise does something that scares her and seems to threaten their bond. Love compares the sensation that accompanies the sudden release of cortisol to sticking your finger in an electric socket, followed by the sort of "sugar blues" crash that occurs after you polish off a few too many glazed doughnuts.

"A cortisol hangover can last for hours in men and up to several days in women," Love says. "It's no wonder both sexes try to prevent it."

Okay, this makes sense, but if talking about relationships makes men twitchy and drunk on cortisol, then what's the alternative? Charades? Oprah.com: How to be a black-belt communicator

"It's the connection, stupid!" exclaims Love, quickly adding that it's not me personally she's calling stupid. "Everyone -- men, women, myself included -- needs to learn that before we can communicate with words, we need to connect nonverbally. We can do that in simple ways, through touch, sex, doing things together. The deepest moments of intimacy occur when you're not talking."

Stosny puts it this way: "We need to stop trying to assess the bonding verbally and instead let the words come out of the bonding." Interestingly, he adds, "When couples feel connected, men want to talk more and women need to talk less, so they meet somewhere in the middle. Being aware of the fear-shame dynamic helps."

To illustrate the point, Love tells the story of an afternoon when she and her husband were lying in bed naked after showering. "I was wondering if he'd initiate sex, when all of a sudden in my mind I crossed over to his side of the bed and got a sense of what it was like to be him, never knowing if he's going to be accepted or rejected. It was terrifying. I understood then how deeply ashamed that must make him feel," she recalls. "It was an epiphany that changed my life." She immediately began emphasizing compassion in her work with clients, and has come to believe -- as does Stosny -- that it's even more crucial to the success of a long-term relationship than love.

The tricky part is that men and women must empathize with vulnerabilities they don't feel to the same degree -- namely fear and shame. To do this requires what the authors call binocular vision, in which each partner makes a conscious effort to consider the other's point of view. "The problem is that when you're angry, you're wrong even when you're right because you can't see the other person's perspective," Stosny says. "That's when you lose the thing you long for most, the connection."

Okay, I get it: Connection rules. But it's hard to imagine most people being capable of reaching out to their partners in the heat of an argument. Love and Stosny acknowledge that it's a tall order. Still, they say, for couples to productively address the hurt that underlies anger, it helps to have a previously agreed-upon signal such as a hand gesture to keep disagreements from spiraling out of control. This doesn't mean they should try to ignore their feelings, but instead find a way to convey that the other person matters more than whatever they're resentful or anxious about -- and then talk. The beautiful part, Love says, is that "it takes only one person to make the gesture. The partner will feel the impact, even if he or she can't drop the anger right at that moment."

Admittedly, this approach is most effective for couples in a precrisis state, Stosny says, "when there's still time for the man to step up to the plate and stop withdrawing or being reactive, and for the woman to understand that her husband really does want to make her happy and to stop being so critical. Men are better able to stay in the room and listen to women if they don't think they're being blamed for their distress."

But ultimately, Love adds, "couples have to decide that the relationship is more important than all those things they do that annoy each other." Oprah.com: Are you a nag? How to stop

"Even when Hugh throws his sopping wet towel on the bed, forgets to put gas in the car, or stares into space when I try to tell him something that really matters to me?" I ask, only half joking.

"If you give him positive reinforcement instead of criticizing him, he'll start doing more of the things you want him to do," Love says.

The next night over dinner, I give it a whirl. "I love it when you put gas in the car and hang up your wet towel," I say. He looks at me like I've gone off the deep end. "What's up?" he asks suspiciously. "Why are you being so nice?"

But a few days later when I'm distraught over a potentially scary mammogram report and he jumps in too quickly to reassure me that everything will turn out fine (it does), I decide to try out the binocular vision that Love and Stosny recommend. That's when I see that Hugh feels like a failure because he wants to make things better and he can't.

So instead of my usual knee-jerk irritability at what I perceive as his lack of sensitivity, I say, "I'm terrified and I just need you to listen." Which he does, patiently, lovingly. After I've finished reciting my laundry list of fears, he holds me close and neither of us says anything for a long time. We don't need to.

It's the connection, stupid!

By Barbara Graham from "O, The Oprah Magazine," February 2007

All About Marriage • Relationships