Five sure ways NOT to get over someone

(The Frisky) -- I'm going to come right out and cop to this -- I have been dumped more times than I can count. You'd think that after the 5,234th time, I'd be a tad more resilient, but nah. I have mourned certain dead relationships for longer than they went on in the first place and made an idiot of myself over men so patently unworthy, it's a wonder I haven't had my feminist card revoked. 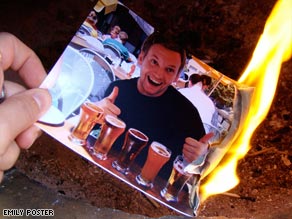 If there is a chance you may get back together with a boyfriend, don't burn his pictures.

Lucky for everyone within sobbing distance, I haven't been dumped in a while, but as a public service I figured I'd share my mistakes so you can learn from them.

1. Ring, Ring: It's natural that in times of pain, you reach out to the person you feel closest to. Unfortunately, the person closest to you just took your heart and used it to clean his toilet.

Calling him in tears, protesting that he can't break up with you because you loooove him is only going to cost you dignity points. Following that up with any variation on "you'll never meet anyone as awesome as me ever again!" will only cause him to pray you're right.

2. "Researching" (i.e., cyberstalking): Facebook, Twitter, MySpace, et al., make this not only tempting, but ridiculously easy. But do your best to refrain from checking his relationship and/or mood status every ten seconds. ("OMG -- what do you think he means by pensive?") Block his IM and delete his RSS. And don't even think about luring him in with a fake online dating profile.

3. Retail Therapy: The list of approved post-breakup purchases is short: anything from your favorite boutique that sells stuff you consistently look amazing in. Do not march into The Gap and spend just for the sake of spending. A month from now you'll still be happy with your amazing new set of lingerie, but you're only going to feel worse if all you have to show for your grief grab is an ugly, pebbled leather satchel, an ill-fitting mustard suit, and a giant new credit card balance.

4. Bonfires of the Insanity: This wasn't a lesson learned first hand (I never throw anything out!), but I had a friend who used to break up with her boyfriend every month or so. And each time she'd dramatically burn every single reminder of him. All the gifts, photos, souvenirs from romantic vacations -- didn't matter. If he'd touched it, it was torch fodder. Then they'd get back together, and she'd have to take all new pictures and hint for new presents (which got tired really fast), until he got on her last nerve again.

While constant reminders of what was can be painful, do yourself a favor and just box them up and put them away for a while. Especially if we're talking expensive gifts! Be practical, ladies! In a year, you won't care who gave you the Cartier watch, but you will spend the rest of your life kicking yourself for lighting it on fire.

5. The Shriner: On the flipside of the pyromaniacal approach, lies the hope-springs-eternal response. (Also known as the delusional freak-out.) Again, this is info gleaned second hand, from a young man I know. Instead of black velvet paintings or even centerfolds, his bedroom's sole decoration was a cobbled together shrine to a long-ago ex. Along with photos, and a t-shirt she'd left behind, he also had the scrap of paper where she'd first written her phone number and an empty bottle of cheap champagne that they'd once shared. Ten years ago.

Aside from the Ghost of Girlfriend Past, how many ladies do you think stuck around once they witnessed that little display?

All About Dating • Relationships