Bush: Rumors of U.S. bases in Africa are 'baloney'

ACCRA, Ghana (CNN) -- President Bush sought Wednesday to dispel rumors that the U.S. plans to bring "all kinds of military to Africa," saying that is "simply not true." 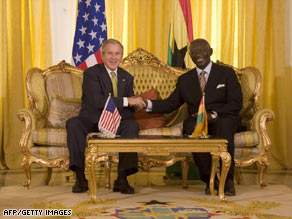 He said the United States has no plans to add new bases in Africa but may open an office somewhere on the continent as part of its plans for Africom, a new U.S. military command that will focus on Africa.

The president did not elaborate on the size of such an office but took pains to say it would not be a military base in the traditional sense.

"The purpose of this is not to add military bases," Bush said. "I know there's rumors in Ghana -- 'all Bush is coming to do is try to convince you to put a big military base here.' That's baloney. Or as we say in Texas, that's bull."

"I am happy for the president's dispelling any notion that the United States of America is intending to build military bases on the continent of Africa," he said.

The U.S. military divides the world into regions and has a "command" for each region. The U.S. Central Command, for example, focuses on U.S. military concerns and activities in much of the Middle East and South Asia, while the U.S. Southern Command focuses on Latin America.

The new command established last year, Africom, will be based in Stuttgart, Germany "for the foreseeable future," the U.S. military says.

"Now, that doesn't mean we won't develop some kind of office somewhere in Africa. We haven't made our minds up," Bush said Wednesday. "I want to dispel the notion that all of a sudden America is, you know, bringing all kinds of military to Africa. It's just simply not true."

About 1,800 U.S. troops are stationed in Djibouti, a country in the Horn of Africa, as part of the U.S. fight against Islamic extremists.

"The whole purpose of Africom is to help leaders deal with Africa's problems," he said in a joint news conference with Kufuor. E-mail to a friend

CNN's Ed Henry and Tim McCaughan contributed to this report.