WASHINGTON (CNN) -- Sen. Hillary Clinton on Wednesday warned that millions of people in Florida and Michigan "are in danger of being excluded from our democratic process" if their votes are not counted. 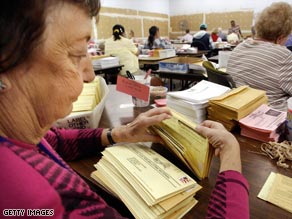 The Democratic National Committee stripped both states of their delegates for violating party rules by scheduling their primaries too early.

At issue is whether Democrats in Michigan and Florida will get to weigh in again in the contest between Clinton and Sen. Barack Obama.

"The results of those primaries were fair and they should be honored," Clinton told a breakfast gathering hosted by the U.S. Hispanic Chamber of Commerce Foundation in Washington.

Michigan Democrats went to the polls on January 15 and Florida voted on January 29.

Clinton won Florida with 50 percent of the vote, and 33 percent for Obama. Neither candidate campaigned there, though Clinton held a few permitted fund-raisers.

In Michigan, Clinton received 55 percent of the vote, with 40 percent of voters choosing "uncommitted." Obama's name was not on the ballot.

Party officials in Florida and Michigan knew ahead of their primaries that delegates would not be counted as a result of their decisions.

With Clinton and Obama locked in such a tight battle for delegates, the two states could play a key role in determining the Democratic nominee.

Obama has 1,610 delegates, while Clinton has 1,480, according to the latest CNN estimates. A candidate needs 2,025 delegates to win.

Voters in Florida largely support holding a new primary using mail-in ballots if it would not cost taxpayers any money, according to a survey released Wednesday.

Florida Senate Democratic Leader Steven Geller commissioned a poll earlier this month asking Florida voters if they would rather keep the original vote though it risked rejection by the DNC, or have a revote at no cost to taxpayers.

"By a margin of almost two to one, the voters said they supported holding a new Democratic primary election, using a prepaid mail-in ballot" that would not cost taxpayers' money, Geller said in a statement released Wednesday.

"Their message was unmistakable: 'Whatever it takes, we want our votes to count.' "

The poll, conducted March 10-11 by The Kitchens Group, sampled 600 registered Democrats in Florida who participated in the original primary.

Democratic Sen. Bill Nelson of Florida has called for a mail-in primary in which voters would express their preference for Clinton or Obama.

Nelson on Wednesday said his first preference was to recognize the original vote, but a federal court has ruled against that.

"My next choice was a full-fledged revote run by the state. But officials said that would be too costly and insisted there wasn't time. In my view, at this late hour, mail-in balloting would be the most practical and fair way to let Florida voters have a full say in the selection of their Democratic nominee," he said in a statement.

Nelson said if anyone has any other ideas, they need to be put on the table before it's too late.

"Time is short, and we need to make available for public comment a workable plan. The bottom line is: We all agree that the voters of Florida must be heard," he said.

But a majority of the Florida's Democratic delegation said in a statement Tuesday night they oppose both a primary revote and vote-by-mail.

Plouffe expressed strong reservations on Wednesday to the prospect of a mail-in revote in either Florida or Michigan.

"I do think there's real questions about the mail-in option here," Plouffe said on a conference call with reporters. "These are very complicated elections to put on."

Obama, fresh off a victory in the Mississippi primary, said Tuesday night that he also has worries about the prospect of a mail-in vote.

"I think there are some concerns in terms of making sure that whatever we do is fair and that votes are properly counted and the logistics make sense," he said.

Sen. Carl Levin, D-Michigan, also has said he doesn't think there is a fair way to redo the vote in his state.

"There's no way to have a primary. That's state law. That can't be changed, and that can't be paid for," Levin said Sunday on ABC's "This Weekend."

Levin said a mail-in caucus is one possibility, but "there's some real problems with that, too."

"Not just cost, but the security issue. How do you make sure that hundreds of thousands, perhaps a million or more ballots, can be properly counted and that duplicate ballots can be avoided?"

Florida Gov. Charlie Crist, a Republican, and Michigan Gov. Jennifer Granholm, a Democrat, called on the DNC last week to seat their state's delegations instead of silencing "the votes of 5,163,271 Americans" who voted in their primaries.

"It's unconscionable to me that some party boss in Washington is not going to permit the people to be heard," Crist said. "That's not what America is all about, and it's wrong." E-mail to a friend

CNN's Sasha Johnson and Alex Mooney contributed to this report.