WASHINGTON (CNN) -- The Bush administration misused intelligence to build a case for the U.S.-led invasion of Iraq in 2003, the Senate Intelligence Committee said in a report issued Thursday. 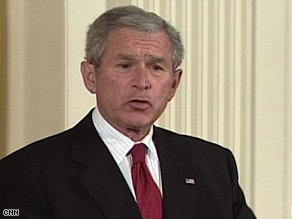 The White House exploited its ability to declassify intelligence selectively to bolster its case for war, the committee chairman, Sen. John D. Rockefeller IV, D-West Virginia, said in the report.

Senior officials disclosed and discussed sensitive intelligence reports that supported the administration's policy objectives and kept out of public discourse information that did not, he said.

The report also found that the administration misled the American people about contacts between Saddam Hussein and al Qaeda.

"Policymakers' statements did not accurately convey the intelligence assessments" about contacts between the then-Iraqi leader and Osama bin Laden's group, "and left the impression that the contacts led to substantive Iraqi cooperation or support of al Qaeda," the report said.

"Statements and implications by the president and secretary of state suggesting that Iraq and al Qaeda had a partnership, or that Iraq had provided al Qaeda with weapons training, were not substantiated by the intelligence," according to the committee's exhaustive report on prewar intelligence.

The top Republican on the committee dismissed its findings as "partisan gamesmanship."

"It is ironic that the Democrats would knowingly distort and misrepresent the committee's findings and the intelligence in an effort to prove that the administration distorted and mischaracterized the intelligence," said Sen. Christopher Bond of Missouri.

The White House also rejected the report as old news.

"I know this is another report, and I'm sure that they put a lot of considerable thought into it, but this is a subject that has been gone over many many, many times, and I don't know of anything that's particularly new in it," said spokeswoman Dana Perino, who said she had not yet read it.

She said the White House relied on the same information as the rest of the world, admitting that it was wrong but denying that Bush had set out to mislead the country.

White House claims that Hussein was seeking weapons of mass destruction were partially backed by available intelligence, the report found, but did not reflect disputes within the intelligence community.

The CIA, among others, believed Iraq was trying to acquire nuclear weapons, but the Department of Energy disagreed, the report said.

No weapons of mass destruction were found in Iraq after the invasion.

The report also took the administration to task for its predictions about the aftermath of the invasion, including Vice President Dick Cheney's assertion that U.S. troops would be greeted as liberators.

Bush and Cheney did not request intelligence reports about the post-war situation, and their public statements did not reflect doubts and uncertainties in the intelligence community, the report said.

"Bush and his advisers knew that the American people would almost certainly not support a war launched primarily for the ambitious purpose of transforming the Middle East. Rather than open this Pandora's Box, the administration chose a different path -- not employing out-and-out deception, but shading the truth," McClellan wrote in his memoir, "What Happened."

Current and former White House officials have dismissed McClellan's accusations, saying he was not in a position to know about top-level White House decision-making before the war when he was deputy press secretary.

The Senate committee chairman slammed the White House in a statement marking the release of the long-awaited report.

"Before taking the country to war, this administration owed it to the American people to give them a 100 percent accurate picture of the threat we faced," Rockefeller said Thursday.

"Unfortunately, our committee has concluded that the administration made significant claims that were not supported by the intelligence. In making the case for war, the administration repeatedly presented intelligence as fact when in reality it was unsubstantiated, contradicted or even nonexistent. As a result, the American people were led to believe that the threat from Iraq was much greater than actually existed," he added.

The report picked apart three speeches by Bush, including his 2003 State of the Union address two months before the invasion, one by Cheney and then-Secretary of State Colin Powell's U.N. presentation about Iraq in the run-up to the war.

The report was approved by a 10-5 vote, with some Republicans dissenting.

Some GOP members of the committee had wanted the report to examine prewar statements by Democrats, including Sen. Hillary Clinton.

Democrats on the committee blocked the suggestion and limited the report's purview to administration statements only.

CNN's Pam Benson and Ed Henry contributed to this report.