Clinton may have key role before November

WASHINGTON (CNN) -- Whether Sen. Hillary Clinton can begin to unite Democrats behind their presumed nominee may be crucial to the party's success in the fall. 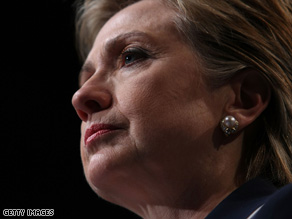 Clinton is expected to throw her support behind Sen. Barack Obama's presidential campaign during an event at noon ET Saturday at the National Building Museum in Washington.

A CNN poll released Friday shows that the party is divided after a primary season that stretched over nearly 18 months and 57 contests.

The primary battle created enormous enthusiasm among Democrats. The two candidates split nearly 36 million votes between them, easily shattering records for the number of voters who turned out for the Democratic primary season.

But the primary battles also heightened animosity between the two camps, and the at times bitter battle between Obama and Clinton revealed divisions within the party along race, class, age and gender lines.

Watch Suzanne Malveaux talk about what's next for the candidates »

Exit polls of Democratic primary voters -- especially in swing states like Ohio and Pennsylvania -- showed that Clinton's supporters were more likely to be white, working-class, older and less educated than the voters who backed Obama. Clinton also did better with Latino voters.

The question for Clinton is whether she can persuade her supporters to back Harvard-educated Obama, the first African-American to head a major party ticket.

Clinton has vowed to do whatever she could "to ensure that Democrats take the White House back and defeat John McCain," and her efforts to reach out to woman and blue-collar voters -- groups with which she handily beat Obama -- may be crucial if the Democrats are to take back the White House.

Donna Brazile, a member of the Democratic National Committee and CNN contributor, said it was important after the hard-fought primary season that Obama and Clinton work to promote reconciliation. "There's a lot of healing to be done," she said.

Clinton's choice of words Saturday will be telling in terms of the prospects for party unity, political analysts said.

Clinton must "be gracious, be enthusiastic, talk about how what unites them is more than what divides them," CNN analyst Jeffrey Toobin said.

Toobin also said the speech could be important for Clinton's political future. "She has to be known as someone who stood with her party," he said.

In particular, Clinton must speak to the female voters who supported her, "many of whom are so angry about this race," CNN analyst Gloria Borger said.

"She really has to tell women why Barack Obama is the best candidate for president," Borger said. "She has to go a long way to try and sort of get rid of that anger."

Obama also has his work cut out for him.

"[Obama] wants to do everything possible to assure Sen. Clinton, her supporters, her donors, the voters who went to the polls to cast their ballots, that he will champion their cause," Brazile said.

The National Organization for Women, which had endorsed Clinton, has not decided whether to endorse Obama. But the group says it's time to heal.

"Women need to see and hear a commitment from [Obama] on the issues that they care about," NOW President Kim Gandy said.

Even some of her own supporters suggested that Clinton may have hurt the reconciliation process when she did not immediately concede the race to Obama after he won the 2,118 delegates needed to capture the party's nomination Tuesday night.

In a conference call Wednesday, members of her home congressional delegation pushed her to quickly endorse her former rival.

Rep. Charles Rangel, D-New York, said, "The New York congressional delegation are with her to the end, and we thought the end was the end."

But the Clinton camp resisted the move so it could gauge what her supporters wanted and allow Clinton to bow out of the race on her own terms.

Tensions between the two camps may have also increased when some of Clinton's most prominent supporters launched a campaign Wednesday to get her on the Democratic ticket as the vice presidential nominee, arguing that it would help unify the party.

Watch analysts debate who would be the best VP for Obama »

Democratic voters appear to like an Obama-Clinton ticket. A CNN poll released Friday suggested that nearly half of Democrats, 54 percent, would support a joint ticket, but 43 percent would oppose it. The poll's margin of error was plus or minus 4.5 percentage points.

The Clinton camp made it widely known that she would accept the No. 2 slot if it were offered, but the push was viewed as putting undue pressure on Obama to pick his former rival.

Obama said Thursday that "everybody needs to settle down" and let the vetting process run its course.

The pros and cons of some top running-mate choices »

The two discussed how to begin unifying the party during a meeting Thursday night in the Washington home of Sen. Dianne Feinstein, D-California.

Watch how the meeting could help party unification »

CNN contributor and former presidential adviser David Gergen said the meeting may have helped relieve some tension, noting that there was "some awkwardness about how each of them was handling this."

"I think that was very wise of her, after talking to a variety of people, to recognize what she did on Tuesday night and the way her supporters have been trying to pressure him is backfiring."