WASHINGTON (CNN) -- The Republican party may face tough times at the polls come November, according to results of a new national survey. 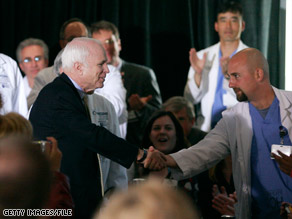 A new CNN poll shows Republicans are not as enthusiastic as Democrats about the upcoming election.

A CNN/Opinion Research Corporation Survey out Friday indicates that 2008 may not be a good year for Republicans up and down the ticket, even though most national surveys indicate the race for the White House between Sens. John McCain and Barack Obama is quite close right now.

"Republicans are far less enthusiastic about voting than Democrats are, and enthusiasm has plummeted among GOPers since the start of the year," said Keating Holland, CNN polling director. "There was already an 'enthusiasm gap' in January, when Democrats were 11 points higher than GOPers on this measure. Now, that gap has grown to 26 points."

See how people responded to the survey »

Fifty-three percent of registered voters questioned in the poll say they think that Obama, D-Illinois, will win the election, with 43 percent saying that McCain, R-Arizona, will win.

"In recent elections, the public has a good track record at predicting the outcome of presidential elections. Most polls which asked this same question in 2000 and 2004 showed more Americans predicting a victory by George W. Bush over John Kerry or Al Gore. The public also correctly forecast that Bill Clinton would beat Bob Dole in 1996," Holland said.

In the battle for Congress, 54 percent of those questioned say they would vote for the Democrat in their congressional district, with 44 percent saying they'd vote for the Republican candidate.

"Democrats lead Republicans by 10 points in the congressional vote. At this point in 2006, the Democratic lead was seven points. Democrats went on to win a landslide in 2006," Schneider said.

Another question hovering over this year's campaign: Race. Forty-two percent say Obama's race will make it more difficult for him to get elected, with 57 percent disagreeing.

"That concern is higher among Democrats, at 48 percent, than Republicans, at 36 percent," Schneider said.