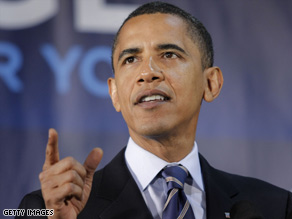 Obama said he would pay for these programs by ending the war in Iraq, reducing government waste, charging polluters for greenhouse gas emissions and ending the Bush tax cuts for wealthy individuals.

During his speech in Michigan, a state hard hit by the decline of the American automobile industry, Obama also rejected protectionist trade polices that many unions say would help protect American jobs, saying "it is impossible to turn back the tide of globalization."

Watch Obama call for America to compete in the global economy »

Obama said he disagreed with those who want to "build a fortress around America; to stop trading with other countries, shut down immigration, and rely on old industries."

"Not only is it impossible to turn back the tide of globalization, but efforts to do so can make us worse off," Obama said. "Rather than fear the future, we must embrace it. I have no doubt that America can compete -- and succeed -- in the 21st century."

A McCain spokesman attacked Obama's plan, saying the Democrat's "agenda to raise taxes and isolate America from foreign markets will not get our economy back on track or create new jobs."

"To help create jobs in America, we need to lower taxes and open up foreign markets to American goods," said McCain spokesman Tucker Bounds. "Americans cannot afford Barack Obama's 'change' that takes us back to the failed policies of the past."

But Obama said now was the time to commit to long-term investments in America's future and blasted McCain for wanting to continue President Bush's economic policies, saying "there is a clear choice in this election. Instead of reaching for new horizons, George Bush has put us in a hole, and John McCain's policies will keep us there. I want to take us in a new and better direction.

"I reject the belief that we should either shrink from the challenge of globalization or fall back on the same tired and failed approaches of the last eight years," he said. "It's time for new policies that create the jobs and opportunities of the future -- a competitiveness agenda built upon education and energy, innovation and infrastructure, fair trade and reform."

The two campaigns have been sparring over who would be a better steward of America's ailing economy, and both candidates have been reaching out to blue-collar voters, many of whom backed Republican President Ronald Reagan over the Democrats, in part, because of cultural issues.

"I believe that there are stark differences between myself and Sen. Obama. ... And I believe that the same appeals that President Reagan made to the so-called Reagan Democrats will succeed there," McCain said during a campaign stop in Arlington, Virginia.

The poll, conducted June 4-5, had a margin of error of plus or minus 3 percentage points.