WASHINGTON (CNN) -- Military operations in Iraq and Afghanistan would be funded into early 2009 under a compromise plan approved Thursday by the U.S. House. 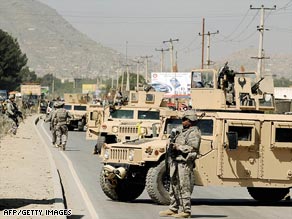 The bill includes $165 billion to fund the wars in Afghanistan, above, and Iraq.

The $165 billion measure puts no restrictions on money the Bush administration had requested to continue bankrolling the wars but includes money for key domestic priorities for House Democrats, namely more unemployment assistance for people who lose their jobs and an expansion of the G.I. Bill.

The plan also includes more than $2 billion for disaster assistance for areas in the Midwest dealing with massive flooding.

President Bush and many congressional Republicans had resisted extending unemployment benefits, but the compromise bill includes another 13 weeks of assistance. Democrats had been pushing for extending benefits to laid-off workers as unemployment rates continue to rise.

Democrats also got Republican support for a college scholarships program for U.S. troops, known as a "new G.I. bill." This program expands educational benefits for veterans from Iraq and Afghanistan to pay for full four-year scholarships.

House Democratic and Republican leaders reached an agreement on the plan Wednesday, and Bush administration officials said they were satisfied with the compromise.

Anti-war protesters in the House gallery shouted and chanted briefly during the vote, tossing what appeared to be slips of paper onto the House floor. They were removed from the gallery without incident.

The two bills approved Thursday will be combined and sent to the Senate for approval as one measure.

All About U.S. House of Representatives • Iraq War • Afghanistan War