WASHINGTON (CNN) -- John McCain's campaign will stop advertising on several Web sites that have vilified Barack Obama as unpatriotic and, in one case, compared the Democratic nominee-in-waiting to Adolf Hitler. 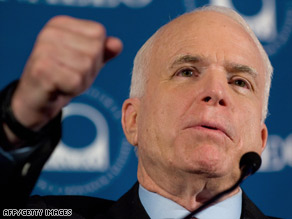 John McCain's campaign says it's getting its ads off Web sites that vilify Barack Obama.

A spokesman for McCain said Monday the campaign was not aware its ads were running on the pro-Hillary Clinton sites. He said the campaign has taken steps to block those sites from its online advertising network.

"When we find stuff like this, we take care of it," said McCain spokesman Brian Rogers.

One Web site, called Stop-Obama.org, is a group blog written by disaffected Clinton supporters, some of whom are now supporting McCain. A banner ad featuring McCain standing side-by-side with Joe Lieberman was running on the site until Monday.

A recent post on the blog outlined the "simple parallels" between Obama and Hitler, and accused Obama's audiences of having the same cult mentality that characterized followers of the German dictator.

McCain's ads have also shown up on a pro-Clinton Web site named "Obama WTF" that accuses Obama of being "spineless," having "communist influences," "courting Jew haters" and being "in the pocket of America haters."

SavagePolitics.com, another anti-Obama site that has run McCain ads, has called Obama a "bold faced liar, a thief, a sexist and a racist."

The McCain campaign pulled the ads after being notified by CNN.

Rogers said the campaign often has no control over where their ads show up on the Web. That's because the campaign uses a third-party vendor -- in this case, Google -- to distribute their banner ads across a broad array of political Web sites by searching for certain key words.

When the campaign is made aware of ads appearing on offensive or irrelevant Web sites, Rogers said, they notify the ad distributor and have the sites added to a list of blocked URLs. He noted the McCain campaign has already blocked "tens of thousands" of such sites.

It's not the first time Web ads have placed a campaign on the defensive.

Mitt Romney's campaign found itself in the politically awkward position of advertising on the Web site Gay.com in late 2007, prompting the Web site to pull the ad shortly after it was discovered.

Last September, Barack Obama's campaign removed a campaign advertisement that appeared on the Amazon.com page for the controversial book "The Israel Lobby," which asserts that a network of influential pro-Israel activists hold undue sway over U.S. foreign policy.

CNN's Abbi Tatton and Eric Weisbrod contributed to this report.