(CNN) -- As Sens. John McCain and Barack Obama battle over who has the best approach to national security, a new CNN poll finds Americans' concerns about terrorism have hit an all-time low for the post-September 11 era. 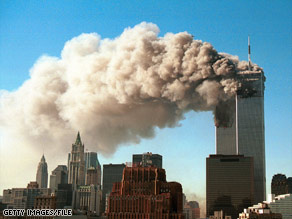 A poll finds fewer Americans fear an imminent terror attack than at any time since September 11, 2001.

According to a CNN/Opinion Research Corp. survey released Wednesday, 35 percent of Americans believe a terrorist attack somewhere in the United States is likely over the next several weeks.

The figure is the lowest in a CNN poll since the September 11, 2001, al Qaeda attacks, which killed nearly 3,000 people.

Between 2002 and 2006, summertime polls typically showed that a majority of Americans believed that a terrorist attack was likely. Last summer, that figure dropped to 41 percent. This summer, it dropped another 6 percentage points.

The latest CNN poll also indicates that the war in Iraq remains deeply unpopular. Three in 10 voters favor the war, while 68 percent oppose it. Similarly, a third of voters would like to see the next president keep the same number of troops in Iraq that are stationed there now.

See how the poll numbers stack up »

For McCain, who is seeking to highlight his national security credentials and has staunchly defended the U.S. presence in Iraq, the latest poll results may not be viewed in a positive light.

"As the threat of a terrorist attack continues to recede in the mind of the American voter, the state of the economy and other domestic issues are likely to become even more important. That would be good news for Sen. Obama, since the Democrats currently beat or tie the Republicans on every issue except terrorism."

Another potential problem for McCain may be found in President Bush's latest job approval ratings.

According to the survey, 30 percent of Americans approve of how Bush is handling his job, while 68 percent disapprove of Bush's job performance. These numbers are roughly consistent with the president's approval ratings over most of the last two years.

They also reinforce the need for the presumptive Republican nominee to create an impression of distance and distinction between himself and Bush.

Democrats, on the other hand, are eager to tie McCain to the unpopular outgoing president and portray his possible election as the equivalent of a third Bush term.

The poll, conducted Thursday through Sunday by phone, surveyed 1,026 adult Americans and carries a sampling error of plus or minus 3.5 percentage points.