(CNN) -- Tens of billions in taxpayer dollars have been lost, wasted or remain unaccounted for in Afghanistan and Iraq, and some of those funds -- and some missing weapons -- have landed in insurgents' hands, a U.S. senator alleged Wednesday. 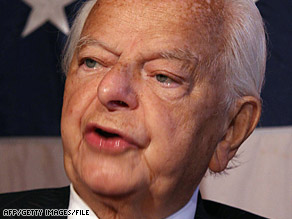 Sen. Robert Byrd, D-West Virginia, leveled the accusations before the Appropriations Committee he chairs. He is calling for arrests and speedy trials for any contractors accused of bilking the U.S. and Iraqi governments.

In a statement released before Wednesday's hearing, Byrd said the military's inability to oversee its myriad contracts adequately has indirectly killed soldiers.

He did not elaborate except to say, "As a result of this lack of oversight, billions of dollars have been lost or wasted, bad contractors have been rewarded, and shoddy workmanship -- some of which has resulted in the deaths of our soldiers -- has gone uncorrected."

Critics have "rightfully" blamed the Bush administration for the misconduct, Byrd said, but culpability extends beyond the executive branch.

"Army commanders, as well as those in the other services, also deserve serious criticism for failing to grasp the strategic situation in Iraq and for not properly planning to implement the massive logistical requirements associated with sustained combat and post-combat operations," Byrd said in his opening statement.

Too few auditors and managers have been assigned to oversee contracts, and too few investigators are charged with prosecuting allegations of fraud, waste and corruption and with retrieving "these stolen billions," Byrd said.

"It is evident that our oversight resources have been strained past the breaking point," he said. "Army contracting dollars and actions have increased more than 350 percent over the last 11 years, while the contracting work force has decreased by more than 50 percent."

Gen. Benjamin Griffin, head of the U.S. Army Materiel Command, told the committee that the military is aware of the shortcomings in its audits. The Army Contracting Command has recently filled leadership posts and is seeking to create more in hopes of addressing the problems.

Contractors are vital in an all-volunteer military force, and most contractors operate honestly because they want to continue doing business with the U.S., added Deputy Defense Secretary Gordon England.

When there is evidence that contractors have "willfully done something wrong," they are prosecuted, England said, but information indicating intentional wrongdoing is sometimes hard to obtain.

"I will say sometimes it's harder in a war zone," England said.

Byrd said the neglect has emboldened those who have designs on embezzlement, bribery, providing shoddy goods and services or "just plain stealing."

The senator from West Virginia said he would like to see more "collars and dollars" -- more arrests, indictments and recovery of lost or wasted funds.

Sen. Patrick Leahy, D-Vermont, said he and Sen. Chuck Grassley, R-Iowa, have introduced a bill to extend the statute of limitations for crimes involving waste, fraud or abuse of taxpayer dollars.

Leahy asked England and the Defense Department's acting inspector general, Gordon Heddell if, given their present limitations, such legislation would provide the additional time needed to pursue such cases. England and Hedell said it would.