Alaska senator on charges: 'I am innocent'

WASHINGTON (CNN) -- Sen. Ted Stevens declared his innocence Tuesday after his indictment on charges that he concealed hundreds of thousands of dollars worth of gifts and services from a company in his home state. 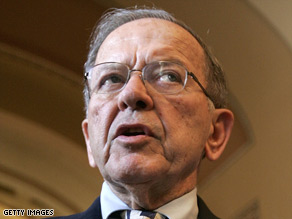 Sen. Ted Stevens, R-Alaska, says he is innocent of the charges a grand jury handed up on Tuesday.

"My public service began when I served in World War II. It saddens me to learn that these charges have been brought against me. ... I am innocent of these charges and intend to prove that," Stevens said in a statement released by his office.

In the indictment, Stevens is charged with lying about receiving gifts worth more than $250,000 from Veco, an Alaska-based energy company on whose behalf he intervened in Washington.

The indictment, returned Tuesday by a federal grand jury in Washington, says the veteran lawmaker "schemed to conceal" the fact that Veco paid for hundreds of thousands of dollars worth of work on his home.

The indictment follows a wide-ranging investigation into ties between the company and lawmakers in Alaska.

The indictment does not accuse Stevens of accepting bribes, Matt Friedrich, the acting assistant attorney general, emphasized in a news conference announcing the charges.

"Bribery is not charged in this case," he said, adding that such a charge "requires proof of a specific quid pro quo. This indictment does not allege that."

But it does accuse Stevens and his staff of receiving requests from Veco for help in Washington and acting on some of them.

In the 28-page indictment, Stevens was charged with seven counts of making false statements on his Senate financial disclosure forms.

Stevens denied those charges, saying in the statement "I have never knowingly submitted a false disclosure form required by law as a U.S. senator."

"Apparently, the media knew about it before he did," Inouye said, adding he had just spoken to Stevens, a Republican from Alaska.

Stevens was meeting with Republican colleagues when the indictment was returned, and he was pulled out of the meeting, his colleague said.

"As far as he's concerned, he's not guilty. And I believe him," said Inouye, a Hawaii Democrat who is one of Stevens' closest friends in the Senate.

In exchange, Stevens "could and did use his official position and his office on behalf of Veco," one of the state's largest employers, the indictment charges.

Allen pleaded guilty in May 2007, paying out more than $400,000 "in corrupt payments" to Alaska officials, the Department of Justice said in announcing the Stevens indictment.

Allen is cooperating with the Department of Justice as part of his plea agreement, Friedrich said. Veco was acquired by another company, CH2M Hill, in September 2007.

The indictment does not restrict Stevens' ability to vote in the Senate, speak on the Senate floor or participate in committee work. Stevens, however, did say he would relinquish his co-chairmanships and ranking member positions, in accordance with Senate Republican rules.

Reacting to the indictment, Senate Majority Leader Harry Reid, D-Nevada, said it was up to Senate Republicans to decide if any punishment was warranted.

"I, of course, have served with Sen. Stevens my entire congressional career," Reid said. "It's a sad day for him, us. But I believe in the American system of justice that he is presumed innocent.

"As far as what's going to happen in the Republican caucus, that's up to them. ... How they handle Stevens is certainly up to them. It is not our responsibility. I'll cooperate in any way that I can."

Sen. John Warner, a Virginia Republican, recalled that he and Stevens were veterans of World War II and that "he was a hero and a fighter, and he's been a fighter for this country since then -- a fighter for his state ever since and a strong leader in the Senate.

"So all I can say is I hope this can turn out fairly consistent with the law and good decision," Warner said.

Another Republican, Sen. Arlen Specter of Pennsylvania, said, "I have known Ted Stevens for 28 years, and I have always found him to be impeccably honest.

Sen. Barbara Boxer, a California Democrat who chairs the Senate ethics subcommittee, said she would release a statement later Tuesday.

FBI and Internal Revenue Service agents searched Stevens' Alaska home in July 2007 in connection with the investigation, which has snared two oil company executives and a state lobbyist, among others.

At the time, he urged constituents "not to form conclusions based upon incomplete and sometimes incorrect reports in the media."

The 84-year-old senator is a former chairman of the Senate Appropriations Committee and is renowned for his prowess in steering federal funds to his vast, sparsely populated state.

Stevens is the oldest Republican senator and second in age only to Sen. Robert Byrd, the 90-year-old Democrat from West Virginia.

He has represented Alaska in Washington since 1968 and is up for re-election in November. He is the longest-serving Republican senator in history.