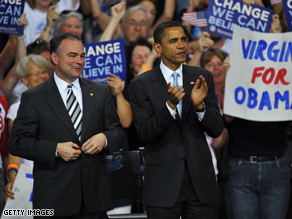 Virginia Gov. Tim Kaine is being mentioned as a potential running mate for Sen. Barack Obama.

Predicting whom a presidential candidate will pick as a running mate, though, is a dangerous game.

However, Kerry had picked former Sen. John Edwards as his 2004 presidential running mate.

With the Democratic convention less than a month away, Obama remains mum.

"The next time I talk about my vice presidential selection, it will be to introduce the selection," Obama told CNN's Candy Crowley in Berlin, Germany, last week.

But Washington being Washington, political junkies just can't help themselves.

Before the 1980s, presidential candidates typically did not unveil their running mates until the convention, often on its very last day.

Democrats broke this trend in 1984, when Walter Mondale announced his pick of Geraldine Ferraro four days before the start of the San Francisco convention.

The Democrats continued this practice through 2004, when Kerry announced Edwards as his running mate 20 days before the convention. Republican candidates did not start announcing their vice presidential picks ahead of their convention until 1996.

The most buzz, however, is around Kaine, who's been campaigning for Obama for the last year and a half. He is also the Obama campaign's national chairman.

"It's flattering to be mentioned; my mom loves it; she calls when she sees it. But, you know, it is just -- that is for the campaign to decide," he told WTOP radio.

Both Obama and Kaine are young and very new to the national stage, with little or no national security experience.

The two Democrats, however, are comfortable with each other. Kaine was the first governor to endorse Obama outside Illinois, when most of the Democratic establishment was still supporting Sen. Hillary Clinton.

Kaine, a Roman Catholic, once worked as a missionary in Central America. He can speak about religious values, something Obama wants more Democrats to do. Kaine also speaks fluent Spanish, another target group for Democrats.

Watch voters sound off on the potential vice presidential picks »

Kaine was also born in Minnesota and went to college in Missouri, two swing states in the Midwest.

Stu Rothenberg of the Rothenberg Political Report said Kaine "makes a lot of sense" for Obama.

"Virginia is going to be one of the two or three key states for Obama," he said.

Just as Al Gore did for President Clinton, Kaine helps re-enforce the central theme: The Democratic Party is new and different.

Biden, who is the chairman of the Senate Foreign Relations Committee, is a good pick in terms of experience, Rothenberg said.

The Democrat's political experience will help counter GOP arguments that Obama is inexperienced on foreign policy.

Biden is also a scrappy campaigner and would almost certainly revel in the traditional attack-dog role of the running mate.

On the downside, Biden is more apt to wander off script more than once during a general election campaign. In addition, Delaware's three electoral votes are safely in the Democratic column.

"Evan Bayh is not the kind of person to make mistakes. He is loyal; he's trustworthy; he's smart; he looks terrific in a photo op," Rothenberg said.

On the plus side, Bayh's service on the Senate Intelligence and Armed Services Committees would help shore up Obama's weak spots.

Running with this centrist Democrat would counter GOP critics that Obama is a typical liberal. Indiana's 11 electoral votes wouldn't hurt, either.

However, Bayh's support of the war in Iraq could put him at odds with his running mate, who has repeatedly brought up his opposition to the war during campaign rallies.

And then there's Sebelius, who could either help or hurt the women's vote.

"Kathleen Sebelius ... might evoke such a scream of anger from Hillary Clinton supporters that a Sebelius pick wouldn't be worth it if you're just going for a woman," Rothenberg said.

The popular two-term governor of Kansas could help Obama carry the state for the first time since 1964.

Sebelius, who chose a former state GOP chairman as her running mate in 2006, would reinforce Obama's image as someone who transcends the normal partisan divide.

The veepstakes spotlight on Clinton, however, has diminished.

"Normally, the presidential nominee doesn't want to be overshadowed by the veep or the veep's husband, and Sen. Clinton brings some considerable baggage and controversy," Rothenberg said.

That controversy includes the perception that she is one of the most divisive politicians. Obama may not want to put a polarizing figure such as Clinton on a ticket aimed at bridging the partisan divide.

On the plus side, there's no better way to unite the Democratic Party than by putting her on the ticket.

Clinton also has the ability to win older voters, Roman Catholics and women, three groups that have remained noticeably cool to Obama.