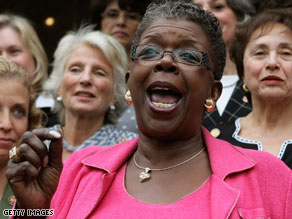 Tubbs Jones, a 58-year-old Democrat in her fifth term representing parts of Cleveland and its suburbs, suffered the aneurysm Tuesday evening while driving in Cleveland Heights, Ohio, her staff said.

She was rushed to East Cleveland's Huron Hospital, where a team of doctors determined Wednesday morning that she had "very limited brain function," said Dr. Gus Kious, the hospital's chief of staff.

Wednesday afternoon, before Tubbs Jones died, Kious said that the aneurysm was in "an inaccessible part of her brain" and that she was in critical condition.

She died at 6:12 p.m. ET Wednesday after her condition declined "throughout the course of the day and into this evening," according to a joint statement from her family, Huron Hospital and the Cleveland Clinic.

The congresswoman had a full day of activity Tuesday, according to a statement from her office, including planning for a September 4 forum on electoral reform at Cleveland State University.

President Bush said Tubbs Jones "was an effective legislator who was dedicated to helping small businesses, improving local schools, expanding job opportunities for Ohioans and ensuring that more of them have access to health care.

See a biography of Tubbs Jones »

"After making history as the first African-American woman elected to Congress from Ohio, the congresswoman worked to expand the rights of all Americans," Bush said.

Tubbs Jones built a reputation in Congress for speaking out. In 2003, she was the only Ohioan in Congress to vote against a resolution supporting U.S. troops in Iraq.

Read reaction from the political community »

She said she voted "no" because the resolution connected Iraq to the September 11 terrorist attacks and declared that Iraq poses a continued threat to the United States. She said that neither of those claims had been proved.

"Our veterans deserve better than lip service," she said.

She stepped up her national political role in 2004, assisting the presidential campaign of Sen. John Kerry, especially in battleground states. She also helped shape her party's platform, traveling the country as a co-chair of the Democratic National Committee.

In early January 2005, Tubbs Jones led an unsuccessful fight against certifying Ohio's tally in the 2004 presidential election, citing voting irregularities. Lawmakers voted down the challenge, allowing President Bush to carry the state by about 70,000 votes and sealing his 286-251 victory in the Electoral College.

Tubbs Jones was one of the most ardent supporters of Sen. Hillary Clinton's 2008 run for the White House. After Clinton bowed out of the race in June, she endorsed Sen. Barack Obama, now the presumptive Democratic nominee.

Tubbs Jones, a superdelegate, had been scheduled to attend the Democratic National Convention next week in Denver, Colorado.

"She was not only a professional, but she could reach into your soul and shake it," said Rep. Joe Sestak, D-Pennsylvania, who said he met Tubbs Jones at a Clinton rally. "Hillary Clinton was lucky to have a supporter like her."

Clinton, in a statement with her husband, former President Clinton, and their daughter, Chelsea, said Tubbs Jones' friendship "meant the world to us." iReport.com: Share your memories of Tubbs Jones

"We could always count on her to be a shoulder on which to lean, an ear to bend, a voice to reassure," the Clintons said. "Over the course of many years, with many ups and many downs, Stephanie was right by our side -- unwavering, indefatigable.

"It was that fighting spirit -- safely stowed behind her disarming smile, backed by so much integrity and fiery intelligence -- that allowed Stephanie to rise from modest beginnings, to succeed in public service, to become a one-woman force for progress in our country."

Born in Cleveland, Tubbs Jones started public life as a municipal judge in 1981. She also had been a trial court judge and, for the seven years before her election to Congress, a county prosecutor.

Her husband, Mervyn, died in October 2003 of a heart attack. The couple had one son.

Tubbs Jones would have turned 59 on September 10.