DENVER, Colorado (CNN) -- Sen. Barack Obama's choice of Sen. Joe Biden as his running mate raises the question of whether Obama can carry off his message of change with a seasoned Washington politician by his side. 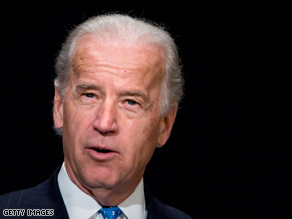 Biden brings to the table an ability to speak knowledgeably about issues ranging from foreign policy to to the country's domestic agenda.

Biden also has been an early and vociferous critic of President Bush's foreign policies, most notably regarding the war in Iraq.

But Biden has personal ties to the war. His son Joseph "Beau" Biden, Delaware's attorney general, is a captain in the Army National Guard and will soon return to Iraq.

Nonetheless, his political experience spans 36 years, and some say that will create a problem for Obama's key talking point of change.

House Minority Leader John Boehner responded Saturday to Biden's new role, saying, "Americans looking for a pair of candidates who are ready to fix a broken Washington aren't going to find them on the Obama-Biden ticket."

The 30-second spot, set to air in key states, also highlights a 2005 interview of Biden in which he praised McCain: "I would be honored to run with or against John McCain, because I think the country would be better off."

"Sen. Obama's choice in a running mate once again brings up his questionable judgment when faced with making major decisions," Davis wrote.

"Sen. Biden has long been a leading critic of Sen. Obama's lack of foreign policy experience. He's criticized Sen. Obama for his lack of leadership and judgment on Iraq, Afghanistan, and his commitment to meet unconditionally with the leaders of rogue states," he added.

McCain advisor Nancy Pfotenhauer told CNN's Wolf Blitzer on Saturday that Obama's decision "clearly showcases that Obama is aware that he lacks the experience, if you will, and the judgment in foreign policy arenas."

Obama has routinely criticized his GOP rival for being a Washington insider. McCain has charged that Obama is too inexperienced to run the country, especially its international affairs.

Biden himself touched on this when he was in the running as a presidential candidate. During a Democratic primary debate, moderator George Stephanopoulos of ABC News referred to Biden's criticism of Obama's experience.

"You were asked, 'Is he ready?' You said, 'I think he can be ready, but right now, I don't believe he is. The presidency is not something that lends itself to on-the-job training,' " Stephanopoulos said.

"I think I stand by that statement," Biden replied.

But in July, Biden said he would choose Obama's judgment over McCain's war record and foreign policy experience.

Watch more on what Biden brings to the ticket »

"Twenty years of experience that has not been very solid in terms of projecting what was going to happen just doesn't make you a better commander in chief," Biden said, referring to McCain. "We don't need as a commander in chief a war hero. John's a war hero. We need someone with some wisdom."

So how does Biden help Obama politically? Biden is Roman Catholic. There are nearly 70 million Roman Catholics in the United States, about 20 percent of the electorate, and they can tip the balance in a close contest.

Biden also has roots in Pennsylvania, a swing state. Obama lost the state to Sen. Hillary Clinton in the primaries. Biden's support could help the campaign win the state in November.

"You're getting national security experience, you're getting enthusiasm, and you hope you're getting some help in those white, working-class, blue-collar towns where Barack Obama needs help," CNN Senior National Correspondent John King said.

"The rap on him is that he talks too long, his speeches don't end, and occasionally he goes off the reservation," King added.

CNN Senior Political Correspondent Candy Crowley says Biden is a "very one-on-one person" and "has a personal story as well: triumph over tragedy. ... He brings depth to this ticket."

Biden, 65, was first elected to the Senate at age 29 in 1972. Shortly after, his first wife and daughter were killed in a car accident. He weighed resigning but eventually decided to continue with his political career.

Biden's career has dogged by what some consider to be gaffes. Most notably, a comment he made about Obama received widespread criticism.

Watch an iReporter weigh in on Biden »

"I mean, you got the first mainstream African-American who is articulate and bright and clean and a nice-looking guy. I mean, that's a storybook," he said in an interview with the New York Observer newspaper, When faced with criticism, he defended the comment as a compliment taken out of context.

So, can Biden control his tendency to say too much? He is certainly trying.

In an April 27 primary debate, moderator Brian Williams of NBC News asked Biden, "an editorial in the Los Angeles Times said, 'In addition to his uncontrolled verbosity, Biden is a gaffe machine.' Can you reassure voters in this country that you would have the discipline you would need on the world stage, senator?"

Biden, known for his sharp wit, must now assume the traditional attack-dog role of the vice presidential candidate.

Democratic strategist and CNN contributor Paul Begala, said Saturday morning that he doesn't think Biden should be a "snarling" attack dog, however.

"Biden can help a lot by first reassuring and even more important, putting Bush and McCain on trial and showing that Barack Obama is change. That's what I think we'll see Joe Biden doing over the next couple of months," he said.

"I have enjoyed for many years the opportunity to work with Joe Biden to bring strong bipartisan support to United States foreign policy." Lugar said.

Lugar's comments on Biden's bipartisan appeal may hint at a theme the Obama-Biden campaign will highlight in the months to come: We can reach out to GOP and independent voters.