(CNN) -- The news that Sen. Barack Obama chose Sen. Joe Biden as his running mate on the Democratic presidential ticket generated hundreds of responses on iReport.com, ranging from passionate support to extreme disappointment. 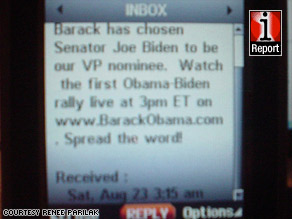 Although some voters were thrilled at the prospect of the veteran politician as vice president, others likened the choice to the pairing of President Bush and Vice President Dick Cheney. Of those who felt that Obama made the wrong choice, many thought Sen. Hillary Clinton should have been on the ticket instead.

Obama "has lost my vote, my family's vote, and I believe a large percent of Hillary supporters," said Jerry Rothwell of Mudrow, Oklahoma.

It "could have been an easy win for the Democratic ticket. I thought Obama was smarter than that. I guess I was wrong," Rothwell said.

Margaret Odgers of Paris, Kentucky, believes that Obama "failed to do something historic" by not choosing Clinton. "No wonder Obama revealed his choice in the dead of the night -- and buried this over the weekend," she said.

Rick Seno of Dallas, Texas, said he was hoping for Clinton or former Gen. Wesley Clark to be on the Democratic ticket, so when he received word that it was Biden, he "lost faith" in the presidential hopeful.

"Biden is not change. Biden is status quo," Seno said. Now, with Biden on the ballot, Seno said, his vote will go to Green Party candidate Cynthia McKinney instead.

Although iReporter Cindy Husted also wanted to see Clinton make her way back into the White House, she said she hopes "all Hillary supporters will lick their wounds ... and support the Obama-Biden ticket. ... Biden's experience will be invaluable as they decide what will work and what will not," she said, calling the Delaware senator "an excellent choice for VP."

Among supporters of the pairing, many people cited Biden's foreign policy experience as an advantage for Obama.

Biden "brings instant credibility on foreign policy and the current inner-workings of Washington," said Ryan Howell of Midland, Michigan. "Sure, Obama's all about change, but you don't get to real change without first understanding how the current system works and how to influence that process in a new direction."

iReporter Prince Nicholas Zu said the selection "will allay the fears of floating voters who are leaning toward voting Obama in November but have concerns over his limited foreign policy experience" and "will send shock down the spine of the McCain team which is making foreign policy the centerpiece of its campaign. Also, Biden's selection enhances Obama's chances of winning in PA and doing well with blue-collar voters."

Ashton Nichols of Carlisle, Pennsylvania, became convinced that Biden was worthy of the White House after seeing him give a commencement speech a few years ago at the University of Delaware. "The speaker we heard on that sunny day in Newark was the same Joe Biden that Barack Obama was thinking of when he made his vice presidential choice this week: smart, focused, clear, concise, humorous and warmly engaging.

"In the face of the flood of cynicism and skepticism that characterizes so many of our views of Washington politicians these days, Biden is one of the very few Washington 'insiders' who manages to maintain his constituents' faith and hope and trust," Nichols said.

And Kelly Evans, a lifelong Republican, says Obama's pick of Biden "sealed the deal" for her, and she'll be voting Democratic for the first time in her life.

"I was waiting to see who [Obama] was going to pick, because I thought that would tell a lot about the direction he wanted to take his presidency," she said. "If he's willing to listen to Biden, he's heading in the right direction. I think it really shows strength in his character that he's able to accept a man who really criticized him and to listen to him. That says a lot about him.

"Biden makes it a credible ticket," she added. "All of a sudden, it's not just about history and change and how far we've come since 1968. It's about, can we really move forward? And, yeah, with that kind of ambition from Obama and that kind of perseverance from Biden, we can do that."

Below are more responses, some of which have been edited for length and clarity.

Amy Quillen:
"While I have nothing against Joe Biden, I am disgusted, and for the first time ever, I have no clue who to vote for. I know [Obama's] big message is change, so he picks a running mate that has been in DC longer than I have been old enough to vote? He picked Biden because of his experience, which sounds logical, but how is he going to change with a certified member of old Washington on the ticket?"

Lisa Perez:
"[Biden's] Irish-Catholic, working-class roots are ones that I can relate to as an Hispanic voter. I remember Sen. Biden during the Gulf War and have always thought he was a straight-shooter and very credible statesman. Sen. Biden provides the 'wisdom' factor. He is truly a senior statesman, and his foreign policy experience is very reassuring during these times. Sen. Biden more than makes up for all the shortcomings that Obama has, in my opinion. I'm elated that he has been chosen for VP position. This kind of leadership is exactly what the Democratic Party and our country needs."

Pat Zimmer:
"Obama's choice was a very smart one. I have always appreciated Joe Biden's directness, and I feel he gives nice balance to the ticket. Obama is smart enough to admit that he doesn't know everything and does have weaknesses, and he selected someone who has great knowledge in those areas. The presidential ticket is now very well rounded, and I believe the election has just been won by the Democrats. Also, smart move on the announcement. The plan was to build anticipation, and they certainly succeeded. Every news channel was 'standing by' for the announcement. Had me turning on the news as soon as I woke up to hear it. Kudos!"

Roger Misso:
"The greatest charge against John McCain has been that he has been in Washington too long to make a difference in the White House. With the addition of Sen. Joe Biden, the Obama campaign can no longer make this charge. Perhaps the greatest problem with his vice presidential selection is that we all know Joe Biden, and we've written him off after several failed attempts at the presidency. All that Obama has managed to do with this pick is alert the world that John McCain is right: He does have a glaring weakness in foreign policy."