DENVER, Colorado (CNN) -- It's a dead heat in the race for the White House. 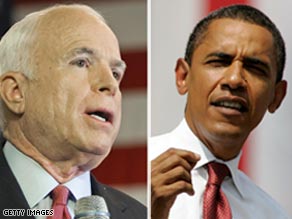 Both John McCain and Barack Obama had the support of 47 percent of people questioned in the CNN poll.

The first national poll conducted after Barack Obama publicly named Joe Biden as his running mate suggests that the battle for the presidency between the Illinois senator and John McCain is all tied up.

"This looks like a step backward for Obama, who had a 51 to 44 percent advantage last month," said CNN Polling Director Keating Holland. "Even last week, just before his choice of Joe Biden as his running mate became known, most polls tended to show Obama with a single-digit advantage over McCain."

So what's the difference now?

It may be supporters of Hillary Clinton, who still would prefer the New York senator and former first lady as the Democratic Party's presidential nominee.

Watch are Clinton backers on board? »

Sixty-six percent of Clinton supporters -- registered Democrats who want Clinton as the nominee -- are now backing Obama. That's down from 75 percent in the end of June. Twenty-seven percent of them now say they'll support McCain, up from 16 percent in late June.

"The number of Clinton Democrats who say they would vote for McCain has gone up 11 points since June, enough to account for most, although not all, of the support McCain has gained in that time," Holland said.

Clinton and Obama battled throughout the primary season, with Clinton winning more than 40 percent of the delegates. She suspended her bid for the White House and backed Obama in early June, after the end of primary season.

The majority of registered voters, 54 percent, say Obama's choice of Biden, D-Delaware, as his running mate is an "excellent" or "good decision." That number jumps to 73 percent when just asked of registered Democrats. But it drops to 59 percent when narrowed to Clinton supporters.

"It's not that there's anything wrong with the choice of Joe Biden. A majority rate the Biden selection as excellent or pretty good. Voters think he is qualified to be president, and with the exception of Al Gore in 1992, the public ranks Biden as the most qualified running mate in recent times," Holland said.

Watch more on Biden and the road ahead »

"A lot of Americans don't know who he is, but his favorable rating is 13 points higher than his unfavorables. But Biden is not Hillary Clinton, and it's possible that is enough to have moved some of her supporters away from the Democratic ticket, at least temporarily," says Holland.

Among all Democrats, only 38 percent say Obama should have selected Clinton as his running mate.

Still, 74 percent of all voters questioned in the survey said Obama's selection of Biden as a running mate won't have any effect on their vote for president.