Clinton: Obama 'must be our president'

DENVER, Colorado (CNN) -- Sen. Hillary Clinton introduced herself as a "proud supporter of Barack Obama" at the Democratic National Convention on Tuesday as she called on her party to rally behind her former rival. 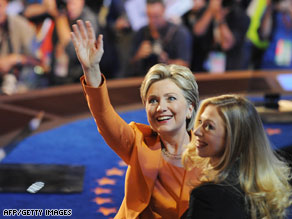 "Whether you voted for me, or voted for Barack, the time is now to unite as a single party with a single purpose. We are on the same team, and none of us can sit on the sidelines. This is a fight for the future. And it's a fight we must win together," she said.

Leading up to her address, there was a lot of speculation about what she would say and whether she would make a strong enough call for unity. But she made a very strident case for Obama's candidacy.

"No way. No how. No McCain. Barack Obama is my candidate. And he must be our president," Clinton said. Her speech, which was the last of the night, followed a line up of other Democrats who used their time at the podium to attack President Bush's record and McCain's policies.

Appearing strong and energized, Clinton thanked her voters for supporting her historic campaign as a female candidate and reached out to those wary of Obama by telling them they weren't in this for her, but for her cause. That cause, she said, is the same thing that Obama and the rest of the Democratic Party are fighting for.

Many analysts said the speech would end speculation that Clinton has not fully embraced Obama as her party's candidate.

Clinton mentioned Obama by name more than twice as many times as she mentioned the party as a whole.

Analysts weigh in on the night's speakers »

"I thought she was a class act," said political analyst David Gergen, who worked in the Clinton administration. "I think it could well be said that nothing has so become her campaign as the way she has ended it here tonight."

Clinton was met with a standing ovation from an enthusiastic audience. Only a few pockets of the standing-room only convention center weren't on their feet cheering for her. Observers said she had the biggest reception of the evening.

As soon as the speech ended, the McCain campaign issued a statement implying that Clinton did nothing to dispel her previous criticism of Obama.

"Sen. Clinton ran her presidential campaign making clear that Barack Obama is not prepared to lead as commander-in-chief. Nowhere tonight did she alter that assessment," McCain spokesman Tucker Bounds said.

The McCain campaign has stepped up its effort to woo disaffected Clinton supporters, running ads highlighting Clinton's criticism of Obama during the primaries.

Obama called Clinton after the speech and thanked her for her support and said she could not have done a better job.

Earlier, former Virginia Gov. Mark Warner appealed across party lines in his keynote address. Obama has been campaigning hard to win Virginia, which hasn't voted for a Democratic president since President Lyndon B. Johnson in 1964.

According to CNN's electoral map, the state is a toss-up going into the general election. In order for Obama to take the state's 13 electoral votes, he would need to win over some of Virginia's independent and Republican voters.

Instead of tearing into the current administration, Warner talked about ideas -- highlighting science and technology.

"I know we're at the Democratic convention, but if an idea works, it really doesn't matter if it has an 'R' or 'D' next to it," Warner said. "Because this election isn't about liberal versus conservative. It's not about left versus right. It's about the future versus the past."

His words echoed Obama's own keynote speech of four years ago when the then little known senator from Illinois spoke of what united rather than divided Americans.

Republican strategist Alex Castellanos said Warner's address could do for him what Obama's address did four years ago.

"It's a very powerful speech. He's going to come out of this convention the way Barack Obama came out of the last convention -- as the rock star, as the next guy," he said. "It was an important speech because if this election is about experience and strength, McCain wins. But if this election's about the past versus the future, Republicans have a much tougher job."

Warner's most blunt criticism of President Bush was that he has kept the country from living up to its potential.

Tuesday's other speakers played up Obama's message of change and tore into McCain, saying he would only bring about more of the same.

Pennsylvania Sen. Robert Casey Jr. at one point feigned shock at the idea that the Republican Party was asking for four more years in the White House, promising the party of President Bush and McCain "not four more years, but four more months."