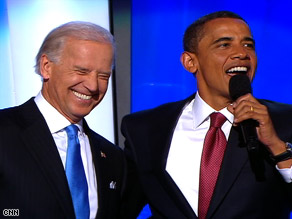 "I think the convention's gone pretty well so far -- what do you think?" he asked of the cheering crowd that, hours earlier, had made him the first African-American candidate to lead a major party White House ticket.

Obama is due to speak Thursday night at Invesco Field, a 76,000-seat stadium in Denver.

He said he had chosen the venue to make sure "everybody who wants to can come."

"I think we will have a great night. I look forward to seeing you there. God bless you, and God bless America," he said in his brief appearance.

All About Barack Obama • Bill Clinton