(CNN) -- Standing on the steps of the Lincoln Memorial on August 28,1963, the Rev. Martin Luther King Jr. shared his vision for a new America: 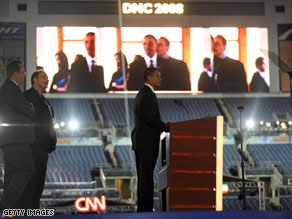 "I have a dream that one day, this nation will rise up and live out the true meaning of its creed: 'We hold these truths to be self-evident: that all men are created equal,' " he said before a crowd of hundreds of thousands.

King's dream for a land where his children would "not be judged by the color of their skin but by the content of their character" would be repeated, meditated upon and memorized for generations to come.

On the 45th anniversary of King's rousing call, Sen. Barack Obama will accept the Democratic nomination at INVESCO Field in Denver, Colorado. In what represents at least a partial actualization of King's dream, Obama will become the first African-American to lead a major party's ticket for president of the United States.

Obama has billed himself as the candidate of change since day one of his White House run.

The Illinois senator preached a similar message when he delivered the keynote address at the Democratic convention four years ago.

In a speech that helped catapult him from a fresh-faced politician to a recognizable name, Obama told his personal story, one that his since been heard by the millions who have followed him on the presidential trail.

He spoke of his humble upbringing: He was the son of a white woman from Kansas and a man from a small village in Kenya. Obama, whose first name means "blessed," grew up with big dreams that rested in faith in a tolerant nation.

"No other country on earth is my story even possible," he said. "That is the true genius of America, a faith in the simple dreams of its people, the insistence on small miracles."

What Obama saw as the true genius of America would also become the foundation of his presidential campaign.

When he announced his candidacy in February 2007, Obama told a crowd in Springfield, Illinois, that "few obstacles can withstand the power of millions of voices calling for change."

"Together, starting today, let us finish the work that needs to be done and usher in a new birth of freedom on this Earth," he said.

Obama -- the third African-American since Reconstruction to be elected to the U.S. Senate -- said he knew that some might see a certain "presumptuousness" and "audacity" to his announcement, considering the odds against him.

He said he believed that there was enough hope for change to conquer the obstacles before him: He was up against Sen. Hillary Clinton, a well-known figure with decades of political experience. He was a relative newcomer to the political scene. And he was black.

But less than a year later, after a shocking win in the first nominating contest in Iowa, a confident Obama told a roaring crowd, "You have done what the cynics said we couldn't do.

"You came together as Democrats, Republicans and independents to stand up and say that we are one nation, we are one people, and our time for change has come."

Obama's perceived lack of experience became the line of attack used by Clinton and Republican rival John McCain. Clinton touted her 35 years of experience and said she was in the "solutions business," while her opponent was in the "promises business." As McCain slammed Obama on foreign policy, Obama pushed hard on his message of change.

Although some questioned the substance of his words, no one doubted their power.

As pundits continued to ask, can Obama really beat the Clintons? Can a junior senator, who decided to run for president with just three years of national experience really become the country's commander in chief? Seemingly unfazed by the skeptics, Obama and his supporters responded with what would become a familiar chant at his campaign events: "Yes, we can."

His campaign became more like a movement. His success rested largely on the shoulders of his ground troops. The 47-year-old won almost all of the Democratic caucuses, where grass-roots efforts were more likely to have greater influence.

Month after month, a campaign fueled by small online donations continued to break fundraising records and knock out every obstacle that stood in its way.

After a protracted and bitter battle, Obama came out on top, clinching his party's nomination in early June.

When he became the presumptive nominee, many African-Americans cried because they said they never thought they would live to see such a day. Vendors soon started selling T-shirts of Obama's portrait pasted alongside King in Walgreens stores and online.

But as Obama approached and crossed the historic milestone, doubts remained about the Democratic nominee: There were the headline-making comments from the Rev. Jesse Jackson, who accused Obama of talking down to African-Americans, as well as criticism from the outspoken Rev. Al Sharpton. There was the controversy over remarks made by his former pastor, the Rev. Jeremiah White. There were suggestions that Obama was too black or not black enough.

Each incident served as a reminder of the ever-present racial tension.

"You have to look at American culture and the fact that it's been 400 years for these kind of racial attitudes to develop, racial behaviors to materialize. And you're certainly not going to wipe that out with just someone being elected to any office in the United States," said Ron Walters, director of the African American Leadership Center.

Before he clinched the nomination, Obama made it clear that although his candidacy marks a step forward on the path to racial reconciliation, the country still has a long way to go.

"I have never been so naive as to believe that we can get beyond our racial divisions in a single election cycle, or with a single candidacy, particularly a candidacy as imperfect as my own," he said.

"History-making events do change history," he said. "When we passed civil rights bills in '64 and '65 and under Lyndon Johnson, racial attitudes didn't change for a long time. But over time, as a result of those bills, they changed dramatically. And in the same way, Martin Luther King didn't change people's attitudes immediately, but over time he had an enormous impact."

Cynics question whether the relatively inexperienced Obama can ride a wave of hope all the way to the White House.

As Obama formally accepts his party's nomination, he will surely counter their arguments and tell them, "Yes, we can."