WASHINGTON (CNN) -- Since Sen. Barack Obama distanced himself from his campaign's first tough reaction to presumptive Republican vice presidential nominee Sarah Palin, his team seems to be figuring out the best way to direct its fire. 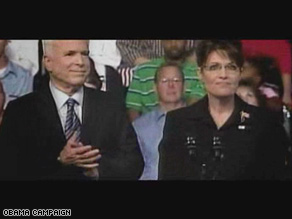 Sarah Palin makes fewer appearances than Bush in the first Obama ad since her pick as John McCain's VP.

In the meantime, its ad approach is simple when it comes to the Alaska governor: keep aiming at Sen. John McCain.

Obama's campaign has begun airing its first ad that includes Palin, but it never criticizes her or even mentions her name.

The 30-second spot, which started airing Saturday on national cable in advance of next week's GOP convention, keeps up the line of attack ran through the Democratic convention: that a McCain presidency would mean the continuation of the Bush policy approach.

The Obama campaign would not say how extensive the ad buy was.

"Well, he's made his choice," the announcer says in "No Change." "But, for the rest of us, there's still no change. McCain doesn't get it, calling this broken economy 'strong.' Wants to keep spending $10 billion a month in Iraq. And votes with George Bush 90 percent of the time. Watch the ad

An Obama spokesman had reacted to the announcement that McCain had picked Palin as his running mate Friday with a statement that called her "the former mayor of a town of 9,000, with zero foreign policy experience."

Obama, who later complimented Palin in a statement, backed away from the criticism. "I think, you know, campaigns start getting these hair triggers," he said. "And the statement that Joe [Biden] and I put out reflects our sentiments."

But her experience and connection to McCain is under scrutiny.

McCain first met Palin only six months ago and had just one conversation with the Alaska governor before offering her the vice presidential slot on the Republican ticket, the Arizona senator's campaign said Friday.

The move appears to be a marked departure for McCain, a man with a tendency to surround himself with a close circle of advisers and politicians with whom he has long felt comfortable.

But according to the McCain campaign, the presumptive Republican presidential nominee first met Palin in Washington at a February National Governors Association meeting. He was immediately impressed with the 44-year-old rising GOP star and decided to consider her for the vice presidential slot.

McCain campaign manager Rick Davis had several conversations with Palin throughout the vetting process, but McCain himself didn't speak with the Alaska governor until Sunday, one day after Barack Obama named Delaware Sen. Joe Biden to his ticket. It was then McCain reached Palin by phone, while she was at the Alaska State Fair, to discuss the possibility of joining the ticket.

Palin traveled to Flagstaff, Arizona, on Wednesday evening, when she met with top McCain advisers Steve Schmidt and Mark Salter. On Thursday, Palin traveled to McCain's Sedona, Arizona, home, where the senator had another conversation with her and formally asked her to be his running mate.

Meanwhile, as news broke Friday that Palin had been selected to join McCain on the Republican ticket, reactions from others believed to have been on his short list trickled in, each speaking more glowingly of the Alaska governor than the last.

Pawlenty was believed to be a longtime front-runner for the vice presidential slot, but Friday morning, he told a local radio station that he wasn't going to Dayton, Ohio, where McCain was to unveil his pick.

"She's a Washington outsider with a commitment to the conservative principles that will make our nation stronger," the former Massachusetts governor said in a statement. "I look forward to campaigning for Sen. McCain, Gov. Palin and Republicans all across the country."

Former Arkansas Gov. Mike Huckabee revealed on his Web site Thursday that the McCain campaign had never asked him for the documents necessary for the vetting process. He praised Palin as a "pleasant surprise" because of her pro-life record and said she was a reminder to women "that if they are not welcome on the Democrat's ticket, they have a place with Republicans."

Florida governor and prominent surrogate Charlie Crist, who appeared to fall off the Arizona senator's radar in recent weeks, complimented Palin for her bipartisan work.

"Sen. John McCain has made a great pick in Gov. Sarah Palin. She has demonstrated tremendous leadership as the chief executive of her state," Crist wrote in a short statement released by his office.

All four men will address the Republican convention in Minneapolis-St. Paul, Minnesota, next week.