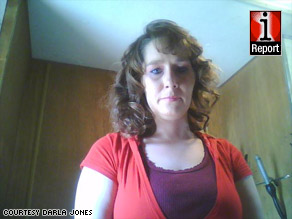 iReporter Darla Jones, who had a child at a young age, said she sympathizes with the Palin family.

Palin revealed Monday that her daughter Bristol is pregnant and plans to marry the father. The announcement followed Internet rumors that Sarah Palin's 4-month-old baby was actually Bristol's.

iReport.com users posted dozens of stories and hundreds of comments in response to the news. Many iReporters said that the issue is a personal matter, while others believed that the pregnancy deserves public attention.

Republican presidential candidate McCain was aware of Bristol's pregnancy before he chose Palin as his running mate, a top adviser to the Arizona senator said.

Democratic presidential nominee Sen. Barack Obama said that families should be off-limits in presidential campaigns after learning of the news. "Let me be as clear as possible," Obama said. "I think people's families are off-limits, and people's children are especially off-limits."

iReporter Darla Jones of Roseburg, Oregon, who supports McCain, agrees that the media and public should leave Bristol and the Palin family alone. iReport.com: Were you married at a young age?

"I had a daughter very young," Jones wrote on iReport.com, explaining that being a young mother made it difficult to get jobs and complete her education. "This should not affect the presidency in any way."

Sabrina Lee also had a child at a young age, but believes that the news of Bristol Palin's pregnancy merits attention. "Personally, I have a right to know anything and everything about the next president and vice president," she wrote on iReport.com.

"I want to know the truth," Lee said. "I feel as a voter I have the right to know everything about each nominee. This is just my opinion, but it's also my vote and it's precious."

"Family values are a Republican platform," she said, describing the news of Bristol's pregnancy as "a travesty."

Alicia Summers of El Mirage, Arizona, agrees that the vice presidential candidate and her family deserve scrutiny. "Did Palin really think she could come into a race at the 23rd hour and not be subjected to questions?" she asked. iReport.com: See, share your thoughts on Sarah Palin

Summers, an Obama supporter, noted, "the press only has two months to find out info about you that they took years to get on everyone else."

She suggested that Palin drop out of the race out of respect for the privacy of her family.

Graduate student Kristine Phillips also believes that Palin should withdraw. "An unmarried 17-year-old pregnant daughter is not consistent with conservative principles," she wrote on iReport.com.

Phillips, who describes herself as politically moderate, said conservatives' support of Palin is "absolutely hypocritical."

"While I understand that Palin's role as a mother may or may not be debated here for the political sphere, this situation does call into question some of her policies during her role as governor and her character as a person," Phillips said. iReport.com: Read more from Phillips

Mark Swiger of Jonesboro, Georgia, urged iReporters to "be professional and ethical by not bringing Sarah Palin's teenage daughter into politics."

Swiger cited Obama and senior McCain adviser Steve Schmidt, who both asked the media and public to leave politicians' children out of the spotlight.

Swiger, who is leaning toward McCain, said he usually votes based on moral issues. He believes that Bristol's pregnancy should have no bearing on her mother's political career.

"This is a moral line of decency that must not be crossed by Democrats, Republicans or human beings," he said.