(CNN) -- Armstrong Williams is an African-American conservative commentator who is thinking about making a decision that he says is so agonizing, it gives him heartburn. 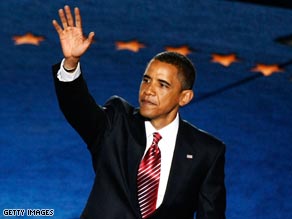 Some black Republicans and conservatives say they are torn by Democrat Barack Obama's presidential candidacy.

This fall, he may vote for Illinois Sen. Barack Obama, the Democratic presidential nominee.

The nationally known radio talk show host is a proud third-generation Republican who chuckles when African-American friends tell him it's time to "return home" to the Democratic Party.

Though he still hasn't decided for whom he'll cast his ballot, there's something about Obama's presidential candidacy that excites him.

"History, brother," Williams said. "It cannot be anything else.

"There's very little that I agree with Obama on. Since the founding of our country, there have only been white men who have occupied the White House. ... To have someone break through that barrier and say to some kids, you can be president. Whether you like it or not, symbolism is important."

Obama's presidential candidacy is causing a political identity crisis among some black conservatives. Torn between ideology and the chance to make history, some don't know what they're going to do when they enter the voting booth in November.

Some black Republicans and conservatives say they are going to stick with their ideology.

Lenny McAllister, a black conservative blogger from North Carolina and a self-described "hip-hop Republican," said that being able to recognize Obama as a historical figure yet not support his candidacy from a policy perspective was a mark of progress.

"When we're able to do that comfortably in an accepted fashion in America [is] when we'll be able to grow and move forward as a country and move past the wounds that we've had from race relations throughout the country," he said. iReport: Watch what it means to be a hip-hop Republican

Compounding the problem for Republican strategists is that Obama's appeal to black conservatives comes at a time when some have grown disenchanted with the GOP during the past few years, according to Michael Fauntroy, a professor at George Mason University and author of "Republicans and the Black Vote."

Some may just vote for Obama to send a message to Republicans -- and to future generations.

"Let's say Barack Obama wins, and 30 years down the line, you're a black Republican or black conservative, and your grandkid comes to you and says, 'Did you vote for Obama?' It's going to be hard to argue why you didn't," Fauntroy said.

That's a risk that Nate Terry, an African-American entrepreneur, is not willing to take.

Terry is a businessman in Tracy, California, who voted for President Reagan, a Republican. He said his early political affiliation as a Democrat was handed down to him like a family heirloom.

"Everybody was always a Democrat, and they could never tell me why," Terry said. "They said, 'Momma did it. Grandma did it.' I said I have to choose for myself."

Terry said he decided to become a Republican because of Reagan and the party's pro-business stance. But he became disenchanted with the Republican Party because of the recent housing foreclosure crisis and the federal government's slow response to Hurricane Katrina in 2005.

"That blew my mind," Terry said of Katrina. "Anytime something goes wrong in our country, I want our government to step in, make it right and then back off and let people take control."

Spurred by his disappointment and Obama's candidacy, Terry switched his party affiliation to the Democratic Party and plans on voting for him.

The African-American vote through history

Through the course of American history, the allegiance of the African-American vote has swung between the two major parties, often dictated by events.

It was naturally aligned with the Republican Party, the party of Abraham Lincoln, in the post-Civil War era. That allegiance, however, began to shift during the early decades of the 20th century.

Many African-Americans migrated to the northern industrial cities, and northern Democrats, with their eyes on electoral gains, began to woo their vote. At the same time, Republicans, facing electoral losses after being branded the party of African-American voters, began to retreat on their promises, Fauntroy says.

Two pivotal events followed: President Truman, a Democrat, integrated the armed forces in 1948, and another Democratic president, Lyndon Johnson, aided by a number of Republican lawmakers, enacted the Civil Rights Act in 1964.

Meanwhile, many white southern Democrats, who did not embrace the politics of their northern brethren, began a steady migration to the Republican Party following the presidential election of 1964, further cementing the allegiance of African-American voters to the Democratic Party.

Since the 1964 presidential election, the Democratic Party has won overwhelming majorities of the African-American vote, Fauntroy said.

Despite the appeal of charismatic Republican presidents like Reagan, who managed to win voters across the aisle, or outreach efforts during the last two decades, polls suggest that the outlook for the Republican Party's performance among African-American voters this election year is bleak. Read about the GOP's outreach efforts

In 2004, African-American voters encompassed 11 percent of the electorate, according to a U.S. Census Bureau study published in March 2006, and new voter registration statistics suggest that those numbers may rise this year.

Caught between history and belief

Black conservatives disagree with Obama on a range of issues from abortion to education.

Williams, for example, said he doesn't like some of Obama's economic policies and his public disparaging of Supreme Court Justice Clarence Thomas, who Obama said was not the strongest candidate for the nation's highest court.

Williams hosts a syndicated radio show. He acknowledged in 2005 that he received more than $200,000 from the Department of Education to promote President Bush's No Child Left Behind law.

He has been public about his misgivings regarding Obama. He told National Public Radio that Obama's candidacy has inspired such agonizing introspection within him that it's given him heartburn.

"He's a liberal," Williams said. "I'm not expecting a miracle out of him."

Tara Wall, deputy editor of the Washington Times editorial page and a CNN contributor, said black conservatives have a complex attitude toward Obama.

Wall said Obama is part of a new generation of black politicians who defy easy labels. They weren't formed in the cauldron of the Civil Rights movement, and their rhetoric is different from their predecessors.

"While they are aware of the Civil Rights movement and their parents certainly are, they weren't there," Wall said. "You have to speak to the folks of the day and the time in which you are running."

Regardless of who wins this race, Williams, the radio talk show host, says Obama's candidacy already has a historical legacy.

"Sen. Barack Obama has knocked on the door, and this country will never be the same," he said. "Anybody can aspire to be president."