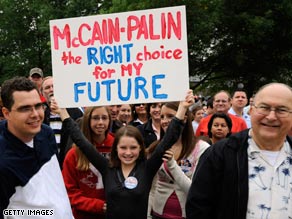 A CNN/Opinion Research Corporation survey out Tuesday indicates that 62 percent of men questioned have a favorable opinion of the Alaska governor, nine points higher than women.

In the poll, conducted Friday through Sunday, entirely after the end of the Republican convention, 23 percent of men have an unfavorable view of Sen. John McCain's running mate, seven points lower than women.

The gender gap is also apparent when it comes to whether Palin is qualified to serve as president. Fifty-seven percent of male respondents said Palin was qualified, 14 points higher than women. A majority of women polled, 55 percent, said Palin is not qualified.

Overall, 50 percent of all respondents think Palin is qualified to serve as president, compared with 70 percent who see the Democratic nominee for vice president, Sen. Joe Biden, as qualified.

Is it fair to raise questions about her experience?

Overall, 50 percent of those polled say criticism of Palin is fair, with 45 percent saying it's only because she is a woman. iReport.com: Share your thoughts on Palin

In 1984, when Democratic Rep. Geraldine Ferraro of New York became the first female running mate on a major party ticket, only 27 percent said criticism of her was fair.

In the current poll, 57 percent overall had a favorable opinion of Palin, six points higher than Biden.

What would happen if Americans could cast separate votes for president and vice president?

Palin would top Biden "by a 53 to 44 percent margin, based largely on the votes of men," Holland said.

"In a hypothetical race with no running mates, [Sen. Barack] Obama gets 49 percent and McCain gets 48 percent," he said. "In the real world, the McCain/Palin ticket and the Obama/Biden ticket are tied at 48 percent apiece, indicating that the running mates bring virtually no votes to the ticket by themselves."

The poll also suggests a gender split when it comes to opinions about McCain and Obama.

Sixty-two percent of men said they had a favorable opinion of McCain, three points higher than women.

Overall, both McCain and Obama had the same percentage of people (60 percent) saying they had a favorable opinion of the candidate.

Poll-takers questioned 1,022 people by telephone. The survey's sampling error is plus or minus three percentage points.