McCain ahead in national polls; Obama up in electoral votes

(CNN) -- Sen. John McCain has inched ahead of Sen. Barack Obama in national polls, but the Democratic candidate holds a steady lead in the most recent Electoral College estimates. 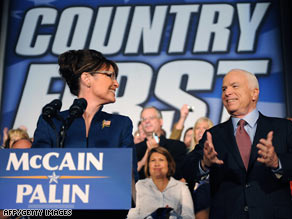 In national surveys, McCain leads by 2 points, 47 percent to 45 percent, according to CNN's poll of polls released Monday night.

In the Electoral College standings, the most recent survey shows 243 electoral votes either safely in Obama's column or leaning his way. At this point, McCain can claim only 189.

Many of the state polls used to determine the Electoral College standings, however, were conducted before the conventions.

Watch how the race has tightened »

On Saturday, Obama was up by 3 in the poll of polls. That lead shrank to just 1 point Sunday before disappearing Monday.

In the most recent survey, 8 percent of respondents said they were still unsure about who they were going to vote for.

The poll, which was conducted Friday through Sunday, carries a margin of error of plus or minus 3 percentage points. It was based on 1,022 telephone interviews.

Republicans are hoping that if McCain can close the popular vote gap, he can also make gains in the electoral gap. The Electoral College will ultimately decide who takes over the White House.

Watch what the different standings mean »

Although polls across the country are open on one day, the election is not a national poll but a series of 51 state-level elections that decide the members of the Electoral College.

Technically, voters aren't choosing a candidate but a slate of electors who have pledged to vote for that candidate when the Electoral College meets.

With 538 electors up for grabs, the candidate with more than half -- 270 -- wins the presidency. The number of electors from each state equals the number of senators and representatives the state sends to Congress

Both candidates are turning their focus to battleground areas as they try to stack the states in their column.

According to CNN's electoral map, the states that could go either way are Colorado, Florida, Michigan, Missouri, New Hampshire, Nevada, Ohio and Virginia.

McCain and his running mate, Alaska Gov. Sarah Palin, are campaigning Tuesday in Lebanon, Ohio, just 30 miles from Obama, who is in Riverside. No Republican has won the White House without winning Ohio.

Both parties are putting a lot of emphasis on Missouri. For the past century, the state has voted for the winning presidential candidate in every election except one. (Missouri picked Adlai Stevenson over Dwight Eisenhower in 1956.)

McCain and Palin campaigned there Monday. They're hoping the state's landscape will help them take its 11 electoral votes.

The state has the 13th oldest population in the country, and Obama has struggled with older voters.

Also, 37 percent of Missourians are evangelical Christians, according to the Pew Forum. That's substantially higher than the 26 percent nationally.

If McCain can take Missouri and tilt the toss-up states of Florida and Ohio, which also have older populations, he will pull ahead of Obama.