'Lipstick on a pig': Attack on Palin or common line?

(CNN) -- Sen. Barack Obama's reference to "lipstick on a pig" has Republicans demanding an apology and Democrats accusing Sen. John McCain of a "pathetic attempt" to play the gender card. 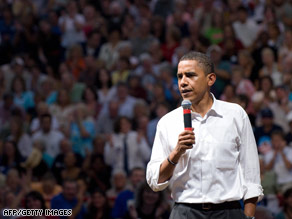 Barack Obama used the "lipstick" line at a campaign event in Lebanon, Virginia, on Tuesday.

McCain's campaign said Obama's remarks were offensive and a slap at Republican vice presidential nominee Sarah Palin -- despite the fact that the Arizona senator himself used the phrase last year to describe a policy proposal of Hillary Clinton's.

Obama shot back Wednesday and accused the McCain campaign of engaging in "lies" and "swift boat politics."

"I don't care what they say about me. But I love this country too much to let them take over another election with lies and phony outrage and swift boat politics," he said in Norfolk, Virginia. "Enough is enough."

The phrase "swift boat" comes from the 2004 presidential election, when the group "Swift Boat Veterans for Truth" launched an attack ad campaign against Democratic candidate John Kerry. Read more about what Obama said

Watch what happens with politics and lipstick collide »

"John McCain says he's about change too, and so I guess his whole angle is, 'Watch out George Bush -- except for economic policy, health care policy, tax policy, education policy, foreign policy and Karl Rove-style politics -- we're really going to shake things up in Washington,'" he said.

Watch how tensions are rising on the trail »

The crowd erupted in applause when Obama delivered the line.

The Illinois senator then praised both McCain's "compelling story" and Palin's "interesting story," and said his "hat goes off" to anyone who's looking after five kids -- "I've got two and they tire Michelle and me out. ...

Within minutes, the McCain campaign announced a conference call focused on the remark, which they said was a deliberate reference to Palin's line: "You know the difference between a hockey mom and a pit bull? Lipstick."

Palin used the line in the opening remarks of her convention speech, and she frequently uses it on the campaign trail.

In Iowa last October, McCain drew comparisons between Hillary Clinton's current health care plan and the one she championed in 1993: "I think they put some lipstick on the pig, but it's still a pig." He used roughly the same line in May, after effectively claiming the Republican nomination.

McCain spokesman Brian Rogers told CNN the campaign saw a "big difference" between the two references: "McCain was referring to a policy proposal. Obama was referring to [Alaska] Gov. Sarah Palin. It's obviously disrespectful and offensive. ...

"Who has been talking about lipstick lately? It was obvious. The crowd went crazy because of it."

It wasn't the first time Obama used the line. In a phone interview with The Washington Post last September, he used it in reference to the situation in Iraq.

"I think that both Gen. [David] Petraeus and Ambassador [Ryan] Crocker are capable people who have been given an impossible assignment," Obama told the Post. "George Bush has given a mission to Gen. Petraeus, and he has done his best to try to figure out how to put lipstick on a pig."

Torie Clarke, a former McCain adviser, even wrote a book called, "Lipstick on a Pig: Winning In the No-Spin Era by Someone Who Knows the Game."

Still, the McCain campaign says Obama's use was intentional, and they want an apology.

"The McCain campaign's attack tonight is a pathetic attempt to play the gender card about the use of a common analogy -- the same analogy that Sen. McCain himself used about Sen. Hillary Rodham Clinton's health care plan just last year," said Obama campaign senior adviser Anita Dunn. "This phony lecture on gender sensitivity is the height of cynicism and lays bare the increasingly dishonorable campaign John McCain has chosen to run."

McCain ally Mike Huckabee took Obama's side on the issue, saying he didn't think it was a swipe at Palin.

"It's an old expression, and I'm going to have to cut Obama some slack on that one. I do not think he was referring to Sarah Palin; he didn't reference her. If you take the two sound bites together, it may sound like it," he said on Fox's "Hannity and Colmes."

"But I've been a guy at the podium many times, and you say something that's maybe a part of an old joke and then somebody ties it in. So, I'm going to have to cut him slack."

But McCain's campaign is not about to let the issue go. They released a Web ad Wednesday that plays Obama's lipstick comments, then asks, "Ready to lead? No. Ready to smear? Yes."