(CNN) -- One of the most memorable moments in the Democratic presidential primaries came last year when a debate moderator asked Joe Biden about his reputation for talking too much. 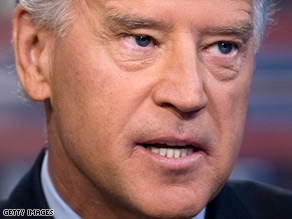 Sen. Joe Biden credits his mother with teaching him to stand up for the little guy.

The moderator asked Biden, who was described by the Los Angeles Times as a "gaffe machine," if he could reassure voters that he would have enough verbal discipline needed for the world stage.

"Yes," Biden replied with a grin and a twinkle in his eyes.

The moderator, NBC anchorman Brian Williams, waited for Biden to elaborate, but a still-grinning Biden said nothing more. Nervous titters spread through the crowd until the audience erupted in laughter.

He delivered this savage putdown of former Republican presidential candidate Rudy Giuliani: "There's only three things he mentions in a sentence: a noun, a verb and 9/11."

Yet Biden's frankness can end up hurting him more than his intended target. During the Democratic presidential primaries, he was widely criticized for describing Obama as "the first mainstream African-American who is articulate and bright and clean."

More recently, Biden attracted attention for telling a crowd that Sen. Hillary Clinton "might have been a better pick" as Obama's running mate.

Biden has weathered plenty of public bruises during his 36 years as a politician. But his private battles have been even more dramatic.

Jeffrey Rosen, writing for The New Republic magazine, said Biden's willingness to mix it up comes from his working-class upbringing in Scranton during the 1950s.

Biden's father managed a car dealership and lectured his son at the dinner table about the horrors of the Holocaust. His dad once quit his job when he saw his boss throw silver dollars on the floor and watched his employees scramble for them, Rosen said.

Biden's mother taught her son to stand up for the little guy as well, Rosen said, before highlighting a passage from Biden's autobiography, "Promises to Keep: On Life and Politics."

"The one thing my mother could not stand was meanness," Biden writes. "She once shipped my brother off with instructions to bloody the nose of a kid who was picking on smaller kids. Religious figures and authority figures got no exemption. They abuse their power, you bloody their nose."

Biden took that pugnacious attitude into the political arena. After earning a law degree from Syracuse University, he won a Senate seat at age 29 representing Delaware in 1972 -- in a surprise victory.

He eventually became the chairman of the powerful Judiciary and Foreign Relations committees, establishing himself as an authority on national security issues and the Supreme Court.

In the 1980s, Biden led the Judiciary Committee through the explosive hearing for controversial conservative Judge Robert Bork.

In 2005, one of Biden's distinctive moments on that committee came when he questioned Supreme Court chief justice nominee John Roberts during the confirmation hearings.

Roberts, who would eventually sail through the hearings, had told committee members that he was not an ideologue but more like a judicial umpire who called balls and strikes.

"As much as I respect your metaphor, it's not very apt, because you get to determine the strike zone," Biden told Roberts.

Biden first ran for president in 1988 but dropped out after charges of plagiarism in a stump speech.

He also ran for the Oval Office this year but dropped out after a poor showing in the Iowa caucuses. He's serving his sixth congressional term, making him Delaware's longest-serving senator.

Biden's private battles, though, have shaped him more profoundly than his political skirmishes.

He overcame a stuttering problem as a child. In 1988, he had surgery for a brain aneurysm. A Roman Catholic, Biden carries a rosary and kept one under his pillow during brain surgery, according to People magazine.

Watch Biden's sister describe how he fought his stuttering »

His most wrenching private struggle took place at the beginning of his political career in 1972. His first wife and infant daughter were killed in a car wreck. In an interview with CNN's Abbie Boudreau, Biden said he even considered quitting politics after the loss of his wife and daughter.

Boudreau asked Biden to read a passage from his autobiography to explain how he moved on to marry his current spouse, Jill.

The passage recounts a moment when he asked his current wife, Jill, how she could marry him when she knew he had adored his first wife.

"She didn't hesitate," Biden said, reading from his book. "That's the reason I can marry you. Anybody that can love that deeply once can do it again."

Biden swallowed hard, cleared his throat and looked down after he read that passage. Then he looked up again, his eyes welling with tears. He told Boudreau that his wife "gave me permission to be me again."

Biden looked down again and said nothing more. For once, he was at a loss for words.