WASHINGTON (CNN) -- New polls in five battleground states that could decide the presidency suggest the fight for the White House between Sens. John McCain and Barack Obama remains a dead heat. 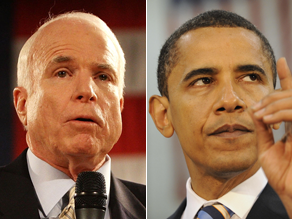 A new poll out Wednesday shows a virtually tied race between John McCain and Barack Obama in key states.

The CNN/Time Magazine/Opinion Research Corp. polls out Wednesday indicate the race for Florida and its 27 electoral votes is tied.

The new survey, conducted Sunday through Tuesday, indicates 48 percent of registered voters in Florida back Republican presidential candidate McCain for president and an equal amount support Obama, the Democratic candidate.

Watch how the candidates are doing in key states »

The poll shows a tight race for Ohio and its 20 electoral votes. The new survey suggests that 49 percent of registered voters in Ohio back Obama and 47 percent support McCain. Interactive: CNN's Electoral Map

The small Obama advantage is well within the poll's sampling error, making the race a tie. President Bush's narrow victory in Ohio four years ago clinched his re-election.

A CNN poll of polls in Ohio, also out Wednesday, gives McCain a 3-point lead, 48-45 percent. The poll of polls is an average of the latest public opinion surveys in the state.

"In Ohio, higher-income voters have moved more toward McCain in the last few weeks, while lower-income voters have trended toward Obama," Holland said. "It looks like economic issues are increasingly dividing voters along income lines -- at least in Ohio -- in the classic pattern that we have seen in previous elections."

The poll suggests Obama is staying competitive in two red states that his campaign is trying to turn blue.

In North Carolina, which Bush won by 12 points in the last presidential election, the poll indicates that 47 percent of registered voters back Obama, 1 point behind McCain. But other polls in the state suggest McCain has a larger lead, and when averaged in a new CNN poll of polls out Wednesday, McCain has a 10-point lead.

In Indiana, the survey puts McCain up by 6 points, 51-45 percent. The lead is within the poll's sampling error. Indiana has not favored a Democrat in a presidential election since 1964, but the Obama campaign is putting a lot of time, effort and money into trying to be the first since then.

Wisconsin has voted for the Democrats in the last four presidential elections, but it was extremely close last time, with Kerry topping Bush by 1 point. It seems Wisconsin remains divided, with 50 percent of voters questioned in the poll backing Obama and 47 percent supporting McCain.

"Obama's strength is in the city of Milwaukee and along the Wisconsin-Illinois border, where he may have a home-field advantage," Holland said. "McCain does well in the rest of the state."

Third-party presidential candidates could affect the results in some of these states.

When included in the results, independent Ralph Nader, Libertarian Bob Barr and Green Party candidate Cynthia McKinney grab a total of 7 percent of the vote in Indiana, 6 percent in Florida and Ohio, and 5 percent in North Carolina, which could be enough to influence the outcome in those states.

So, where does the overall race for electoral votes stand?

The CNN Electoral Map takes into account a number of factors, including the most recent state polls, voting trends and campaign ad spending and events in the particular states.