Bush to meet Pakistani president amid tension over raid 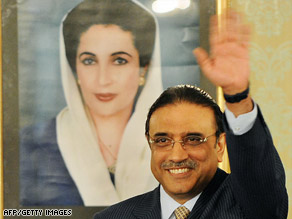 Pakistani President Asif Ali Zardari waves in front of a portrait of his wife, the late Benazir Bhutto.

"The two leaders will discuss efforts to strengthen the bilateral relationship and build a long-term partnership based on common values," said Bush spokeswoman Dana Perino.

Zardari is the widower of former Prime Minister Benazir Bhutto, who was assassinated last year. He was sworn in as Pakistan's president earlier this month after his predecessor, U.S. ally Pervez Musharraf, resigned following nine years of rule.

Tuesday's meeting in New York will come amid tensions between the two countries over the battle against Taliban and al Qaeda remnants in Pakistan's tribal region, which borders Afghanistan.

The Pakistani government responded harshly to the incursion. Last week Pakistan's military chief, Gen. Parvez Kayani, announced that no foreign forces will be allowed to conduct operations inside Pakistan in light of the "reckless" U.S. military ground operation.

The United States is the only country operating in the region known to have the capability to launch missiles from drones, which are operated remotely. In keeping with its policy, the CIA would not comment on Wednesday's strike.

The United States maintains that Taliban and al Qaeda forces operate with relative impunity in tribal areas along Pakistan's border with Afghanistan and use those areas as a staging ground to attack U.S. forces and their allies inside Afghanistan.

All About Pakistan • Al Qaeda • The Taliban