(CNN) -- Sen. Barack Obama on Monday blamed lobbyists, special interests and "an ethic of irresponsibility" in Washington for the financial crisis that has swept the country in recent weeks. 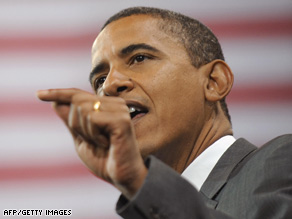 Sen. Barack Obama said Monday there needs to be more oversight in Washington.

The senator from Illinois sided with congressional Democrats, who say a government bailout of the financial sector must include government oversight.

Bush urged Congress to pass the plan as is, but Democrats on the Hill already are circulating a counterproposal.

Sen. John McCain, Obama's Republican rival for the presidency, said Monday that the government's proposal puts too much power into the hands of Treasury Secretary Henry Paulson.

In a conference call Monday with reporters, McCain's top campaign officials refused to say how the senator from Arizona would vote on the plan because it is not yet clear what the final version will contain.

At a campaign event Monday in Green Bay, Wisconsin, Obama laid out the reforms he would pursue as president to avoid another economic crisis.

Watch Obama talk about the crisis on Wall Street »

First, Obama said that he would reform "our special interest-driven politics." He said members of his administration would not be able to use their position as a steppingstone for lobbyist careers.

Watch what Obama says about McCain's role in the situation »

Obama said he would make the government "open and transparent" and put any bill that ends up on his desk online for five days before he signs it.

Secondly, Obama said he would "eliminate the waste and the fraud and abuse in our government." He pointed to fixing the health care system and ending the war in Iraq as ways to cut costs.

Obama also said that he and his running mate, Sen. Joe Biden, would crack down on excessive spending from both parties and close loopholes for big corporations.

Obama said he would pursue "updated, common-sense regulations" in the financial market.

"Never before in the history of our nation has so much power and money been concentrated in the hands of one person," McCain said at a town hall meeting in Scranton, Pennsylvania.

The Republican candidate said that while he admires and respects Paulson, "this arrangement makes me deeply uncomfortable."

McCain said a high-level oversight board should be created to shepherd the government's proposed $700 billion bailout plan.

McCain criticized Obama for not putting up a plan to address the financial situation.

"At a time of crisis, when leadership is needed, Sen. Obama has simply not provided it," he said.

Obama has said several times since the recent Wall Street crisis that, in meeting with top economists, he was encouraged to not roll out a specific plan for fear of overly politicizing the work of Congress on a government bailout of financial firms.

He has, however, offered ideas for the plan -- including limiting pay for executives of businesses that are bailed out by the government and making sure the effort includes a specific plan for the money to be repaid.

McCain on Monday proposed creating a bipartisan oversight board that would be able to "impose accountability and establish concrete criteria for who gets help and who doesn't."

The Republican presidential candidate said the board should be made up of "qualified citizens who have no agenda." He pointed to Warren Buffett, former Massachusetts Gov. Mitt Romney and New York Mayor Michael Bloomberg as potential board members.

McCain also called for "transparency and accountability" on Wall Street and urged Congress to act quickly.

The Bush administration's proposal to bail out the financial system is the centerpiece of what would be the most sweeping economic intervention by the government since the Great Depression.

The plan would allow the Treasury to buy up mortgage-related assets from American-based companies and foreign firms with a big exposure to these illiquid assets.

The aim is for the government to buy the securities at a discount, hold onto them and then sell them for a profit.

The government's rescue plan follows a week of roller-coaster activity in the financial markets. In the lead-up to Bush's proposal, the country saw the collapse of U.S. investment bank Lehman Brothers, a Bank of America buyout of Merrill Lynch and a government bailout of insurer American International Group Inc.

CNNMoney.com staff contributed to this report.