WASHINGTON (CNN) -- By a 2-to-1 ratio, Americans blame Republicans over Democrats for the financial crisis that has swept across the country the past few weeks, a new national poll suggests. 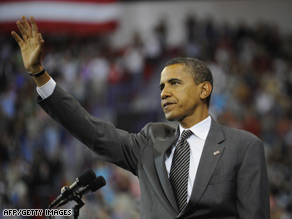 That may be contributing to better poll numbers for Sen. Barack Obama against Sen. John McCain in the race for the White House.

Twenty percent blame both parties equally and 8 percent say neither party is to blame.

And Obama has a 10-point lead over McCain when it comes to who respondents think would better handle the economy overall.

These numbers seem to be affecting the battle for the presidency. Fifty-one percent of registered voters now say they will back Obama, five points ahead of McCain, at 46 percent.

McCain and Obama were tied at 48 percent apiece in the previous CNN/Opinion Research survey conducted September 5-7.

Obama's advantage, while growing, is still within the poll's sampling error of plus or minus three percentage points.

Where did Obama make his gains?

When including people most likely to vote, the results are pretty much the same. Among likely voters, Obama has a four-point lead, 51 percent to 47 percent.

Watch McCain blast Obama for not having a plan »

"The economy has always been considered John McCain's Achilles' heel, and the CNN Poll of Polls started to show an Obama edge in the middle of last week -- just as the financial crisis began to hit home for many Americans," said Keating Holland, CNN's polling director.

The poll also expands to include third-party candidates. When included in the results, independent Ralph Nader has the support of 4 percent of those polled, with Libertarian candidate Bob Barr and Green Party candidate Cynthia McKinney each at 1 percent. Also, Obama has the backing of 48 percent of likely voters, three points ahead of McCain's 45 percent.

A couple of other factors in the survey appear to contribute to Obama's slight rise and McCain's slight drop in the polls. Fifty-three percent of those questioned say McCain, if elected, will mostly carry out the policies of President Bush, who remains extremely unpopular with most Americans. Bush's disapproval rating is up three points from the previous CNN/Opinion Research poll.

The survey also indicates Obama has recaptured the "change" factor. Just after the Republican convention, Obama's lead had shrunk to eight points when voters were asked which candidate would be more likely to bring change. His lead is up to 14 points in the new poll.

Another factor could be McCain's running mate, Alaska Gov. Sarah Palin. Thirty-five percent of those questioned have an unfavorable opinion of her, up 8 points from a previous survey. And two-thirds believe she and her husband should testify in the Alaska investigation into the firing of a state official.

"Change has always been Obama's strong suit, but McCain and Palin clearly made inroads into that issue during the GOP convention," Holland said. "Palin, in particular, was seen as an agent of change when she made her first appearance on the national stage. That may be changing now."

Most Americans think the programs to deal with the financial crisis currently being worked on by Congress and the Bush administration will be unfair to U.S. taxpayers, but they think those programs will help the economy.

Six in 10 think the federal government should step in and address the financial crisis, and 37 percent say the government should stay out. But when it comes to last week's bailouts, support slips to 55 percent. Given concerns about how future programs will affect taxpayers, it's conceivable that public support for the new government plans could be even lower.

The survey comes out just four days before McCain and Obama face off in the first of three presidential debates. Will the debates make a difference? Probably, since the poll finds that 14 percent of Americans say they haven't made up their minds yet.

The first debate, scheduled for Friday in Oxford, Mississippi, will focus on foreign policy, a topic that may play into what some registered voters see as a strength for McCain. The poll finds 54 percent of them believe McCain would display better judgment in an international crisis; 42 percent believe Obama would.