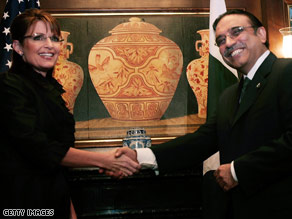 Palin has been in New York meeting international leaders in town this week for United Nations meetings.

"And how does one keep looking that good when one is that busy?" Rehman asked Palin, drawing friendly laughter from the room.

Zardari then called her "gorgeous" and said: "Now I know why the whole of America is crazy about you."

A handler from Zardari's entourage then told the two politicians to keep shaking hands for the cameras.

"If he's insisting, I might hug," Zardari said. Palin smiled politely in response.

The Alaska governor did not answer questions from reporters at her first two appearances on Wednesday, when she joined running mate Sen. John McCain in meetings with Georgian President Mikhail Saakashvili and Ukrainian president Viktor Yushchenko and then traveled downtown to meet with Iraqi President Jalal Talabani.

But she did offer brief remarks to a reporter at the Zardari meeting who asked about her day.

"It's going great," Palin said. "These meetings are very informative and helpful, and a lot of good people sharing appreciation for America."