(CNN) -- Barack Obama's campaign has quickly rejected Alaska Gov. Sarah Palin's claim that he associated "with terrorists who targeted our own country." 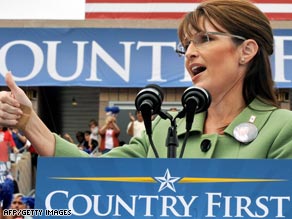 Palin attacked Sen. Obama on Saturday for his brief political relationship with Bill Ayers, a founding member of the radical Weather Underground, which was involved in several bombings in the early 1970s, including attacks on the Pentagon and the Capitol. Obama was a child at the time of the bombings.

Obama and Ayers, now a university professor, have met several times since 1995, when both worked with a non-profit group trying to raise funds for a school improvement project and a charitable foundation. CNN's review of project records found nothing to suggest anything inappropriate in the volunteer projects in which the two men were involved.

Obama campaign spokesman Ben LaBolt said the two had not spoken by phone or exchanged e-mail messages since Obama came to the U.S. Senate in 2005. He said they last met more than a year ago when they encountered each other on the street in a Chicago neighborhood where both live. Fact checking Palin's claim

Watch more on what Palin said »

She referred to an article in Saturday's New York Times about Obama's relationship with Ayers, now 63. But that article concluded that "the two men do not appear to have been close. Nor has Mr. Obama ever expressed sympathy for the radical views and actions of Mr. Ayers, whom he has called 'somebody who engaged in detestable acts 40 years ago, when I was 8.'"

Obama campaign spokesman Hari Sevugan called Palin's comments "offensive" and "not surprising" given the McCain campaign's statement that "they would be launching Swift boat-like attacks in hopes of deflecting attention from the nation's economic ills."

With Obama rising in polls while the country struggles in the grip of a financial crisis, Sen. John McCain's presidential campaign decided to shift attention away from the troubled economy and on to issues of his opponent's character, judgment and personal associations, the Washington Post reported.
iReport.com: What do you think? Sound off with a video response

McCain campaign spokesman Brian Rogers told CNN, "We are coming up on 30 days until the election, and there are a lot of unanswered questions about Sen. Obama's judgment."