(CNN) -- A moving graph at the bottom of the CNN screen during Tuesday night's presidential debate measured the reactions of uncommitted voters in the swing state of Ohio, and it seemed to bear out the theory that negative campaigning draws negative voter reactions. 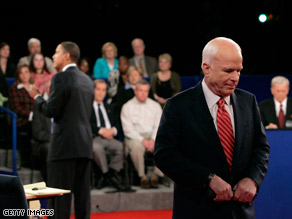 Analysts say undecided voters don't like negative attacks, from either side.

Nearly every time one candidate threw a jab at the other, the voter reaction dipped measurably.

The dips were minor for small digs but slipped further if a candidate continued criticizing his opponent.

For instance, reactions of both men and women voters slid into negative territory when Republican Sen. John McCain said that trying to nail down Democratic Sen. Barack Obama's tax policies is like "nailing Jell-O to the wall."

Watch the criticism and the reaction »

Similarly, the reaction line took a dive when Obama discussed McCain's votes in the Senate against alternative fuels.

Watch the graph go down at this point »

Such negative reactions are typically seen in voters who are undecided, said Merle Black, professor of politics and government at Emory University in Atlanta, Georgia.

"They don't like negative campaigning," he said. "It doesn't matter whether it's one side or the other."

But while each candidate saw dips when criticizing his opponent, voters' reactions were more positive when each began talking about specific plans and ideas regarding the national economy, the war in Iraq, the environment and other issues.

Voters are "worried about real issues," Black said. "They want the candidate to address that. ... That's what the voters are interested in. They know it's a big mess out there, and they want to know what the alternatives are."

See scenes from the debate »

With less than a month to go before the general election, McCain's campaign said before Tuesday's debate that he planned to "take off the gloves." In addition, both campaigns have launched negative advertising campaigns against the opponent in an effort to win over undecided voters.

The stakes for McCain are high, as most polls show him trailing Obama.

"When you are down to crunch time and it's win or lose, you throw niceties out the window," Bruce Vanden Bergh, a professor of advertising at Michigan State University, told CNN before the debate.

And on CNN's "American Morning" on Wednesday, Ben Jones, a former Democratic representative from Georgia, said, "At this point, it appears because the McCain campaign is behind, they think that's the only shot they got left is to bring (negativity) -- but when they do those negative campaigns and negative attacks, it also brings them down.

"So it really doesn't do any good, and people are sick and tired of it."

Both McCain and Obama took numerous opportunities in Tuesday's debate to point out the other's voting record. Obama noted that McCain voted against a program to provide government health insurance for children.

For his part, McCain pointed to Obama's vote on a pork-laden energy bill.

Watch the dig and the reaction »

Both instances caused voters' reaction to head toward negative territory.

The only voters who like to hear the jabs, Black said, are "the strong partisans. They like to see the other candidate, the other side, criticized." But those voters, he noted, have already made up their minds, and in criticizing their opponent, candidates are "not persuading anybody that's persuadable."

Meanwhile, pointing out opponents' shortcomings is a risky strategy, analysts have said, and one that could easily backfire on a campaign.

"Whenever the campaign takes a negative turn, independent voters notice, and they'll punish the candidate that takes it too far," John Avlon, author of "Independent Nation: How Centrists Can Change American Politics," told CNN prior to the debate.

However, voters on some level have come to anticipate a certain level of criticism and jabs in a debate, which may be one reason that campaigns persist with negativity even though voters are known to dislike it, experts said.

"Both of them are probably irritated at each other and want to get the digs in," Black said. "It just kind of goes with the territory."