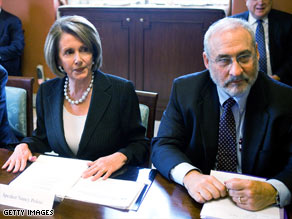 In a letter to House Speaker Nancy Pelosi, Ohio Rep. John Boehner, the top Republican in the House, called the proposed spending "an irresponsible, business-as-usual approach that has earned this Congress the lowest approval ratings ever recorded."

A Democratic leadership aide said the stimulus package Democrats were drafting would include "a heavy emphasis on help to state and local governments."

But in their letter to Pelosi, Boehner wrote, "nothing currently being discussed by the majority as 'stimulus' will stabilize the economy long-term."

Instead, House Republicans proposed a number of measures that, they say, will "turn the corner towards real economic growth," including:

The GOP letter was released as Pelosi met Monday morning with a group of economists, including Larry Summers, a treasury secretary in the Clinton administration, and Nobel Prize-winning economist Joseph Stiglitz.

After meeting with the economists, Pelosi, a California Democrat, said the goals of the stimulus package would be "to provide relief for the middle class, to encourage consumer confidence and to have regulatory reform by re-writing the rules for financial institutions."

Congress passed a $170 billion stimulus package in February after the economy showed signs of weakening. That package included a measure that sent a stimulus check of up to $600 to taxpayers who made less than $75,000 a year. The checks were mailed out this summer.

The stimulus package the Democrats are now working on would work differently: It could provide states with funds to cover mandatory Medicaid spending, which would help state governments avoid cuts to education and other programs, Democratic leadership aides said.

The aides also said the stimulus package could provide funds to help states struggling with their own budgets, as well as infrastructure money, an extension of unemployment benefits, food stamps and more money for low-income energy assistance -- all measures that have passed the House before.

Rep. Barney Frank, D-Massachusetts and the chairman of the House Financial Services Committee, said government jobs were one of the few bright spots in the economy.

The stimulus package would be separate from the $700 billion bailout package passed by Congress this month to help solve the credit crisis in the financial sector that has disrupted credit markets worldwide.

All About Economic Issues • U.S. House of Representatives