Democrats target voters who think race is an issue 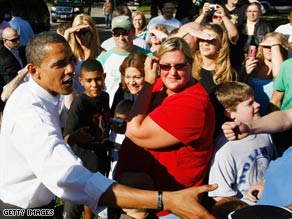 Literature is handed out at union halls and during shift changes at union plants and factories.

But sometimes, Gerry McEntee says, it takes a blunt face-to-face encounter to deal with those who say they can't support the Democratic presidential nominee because of the color of his skin.

McEntee is president of the American Federation of State, County and Municipal Employees and a leader in the AFL-CIO's $200 million 2008 election program. Speaking at a labor rally in Ohio recently, his frustration about the reluctance, or refusal, of some white union members to support Obama spilled into the open.

"When it gets real bad, and they never -- with this one -- look you in the eye, 'Well, I can't vote for him,' " McEntee told the diverse union audience. "This doesn't even come out in code -- it comes out like this: 'I can't vote for him because he is a black man. He's not one of us.' Well, sisters and brothers, when you hear that, you know what you ought to say? This is what I say: 'That is bull----! That is total, absolute bull----!' "

Watch how Democrats are addressing the race issue in Ohio »

The AFL-CIO says its campaign will include 70 million phone calls to union households in key presidential and congressional battleground areas, as well as 25 million mail pieces.

Some of those rebut persistent but false rumors that Obama isn't a Christian, or wasn't born in the United States -- or was sworn in to the U.S. Senate with his hand on a Quran, not a Bible. (The mailing shows Obama being sworn in by Vice President Cheney, his hand on a Bible.)

That those rumors persist so close to Election Day frustrates the Obama campaign and its allies.

"You go and you talk to a member -- I've talked to some -- 'Do you support Barack Obama? You know his record, his record is good for working men and women,"' McEntee relates.

The member might answer, "'Gerry, I know, I like you, but he's a Muslim. Barack Obama is a Muslim,' " McEntee says. "But he's not even a Muslim; he's a Christian!"

Democrats across Ohio and other key battleground states increasingly voice confidence the troubling economic news is boosting Obama's support in the white, working-class areas where the impact of the race issue worries them most.

But they also concede much of this support is soft -- more a rejection of Republican economic policies than a warm embrace of Obama. That's one of the reasons labor unions are dedicating substantial resources to targeting voters for whom race is or could be an issue.

McEntee drew laughter when he framed the stakes this way:

"We have got to seize this opportunity, seize this opportunity like never before, never before. And we have got to make so sure, so sure, that the day after election -- now, this is one message that you could hear the day after election, one of them: 'All labor leaders, to all labor leaders to report to Yankee Stadium. We are putting you on a ship to go to Guantanamo.' "

"I will probably be one of the first people on that ship. I don't want to hear that message," he said.