(CNN) -- Sen. John McCain said Monday that Rep. John Lewis' controversial remarks were "so disturbing" that they "stopped me in my tracks." 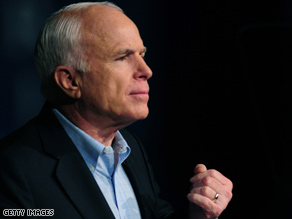 Lewis, a Georgia representative and veteran of the civil rights movement, on Saturday compared the feeling at recent Republican rallies to those of segregationist George Wallace.

"That's not from some, quote, party official, that's from one of the most respected people in America. It's unfair. It's unfair and it's outrageous," he said in an exclusive interview with CNN's Dana Bash.

"I never believed that John Lewis, who is an American hero whom I admire, would ever make a comment of that nature. He even referred to the bombing of a church in Birmingham. That's unacceptable," he said.

Lewis on Saturday said in a statement that McCain and Gov. Sarah Palin "are sowing the seeds of hatred and division."

"During another period, in the not too distant past, there was a governor of the state of Alabama named George Wallace who also became a presidential candidate. George Wallace never threw a bomb. He never fired a gun, but he created the climate and the conditions that encouraged vicious attacks against innocent Americans who were simply trying to exercise their constitutional rights. Because of this atmosphere of hate, four little girls were killed on Sunday morning when a church was bombed in Birmingham, Alabama," wrote the Democrat.

He later said a "careful review" of his comments "would reveal that I did not compare Sen. John McCain or Gov. Sarah Palin to George Wallace."

The aide said they all stopped, delayed McCain's flight and got on a conference call to try to figure out how to respond.

McCain said Saturday that Lewis' earlier statement was "a brazen and baseless attack" and called on Sen. Barack Obama to repudiate it. McCain on Monday again criticized Obama for not condemning Lewis' words.

The Obama campaign said that Obama "does not believe that John McCain or any policy criticism is in any way comparable to George Wallace or his segregationist policies" but said Lewis was "right to condemn some of the hateful rhetoric."

McCain told CNN that Lewis' status as a respected politician makes his remarks even more unacceptable.

"I say when anybody says anything like that that is so beyond the pale, that it stuns me, because that's not what America and this debate should be all about," he said. "I will reject that kind of language, and again, I'm so disappointed in Congressman John Lewis."

Some McCain supporters have yelled "treason," "kill him" and "terrorist" at recent campaign events.

Asked about the anger at his rallies -- something that has increased since the McCain campaign started highlighting Obama's ties to 1960s radical Bill Ayers, McCain said he was insulted by some characterizations of his supporters.

"There is always the fringe element that's in politics in America. The overwhelming majority of the people that come to my rallies are good and decent and patriotic Americans," the Republican presidential candidate said. "For anybody to intimate that the overwhelming ... 99 percent is anything but patriotic and good Americans is frankly unacceptable, and I won't stand for it."

Obama has publicly acknowledged McCain's efforts to get his supporters to show respect.

McCain said Monday that despite trailing Obama in the polls, he's comfortable with where he and his running mate are.

According to CNN's latest poll of polls, Obama is up by 8 percentage points, 50-42.

"We're going to be just fine. I have been written off on so many occasions by political pundits that it's hard for me to count," McCain said, joking that his campaign has "more lives than a cat."

"But the point is -- we're doing fine. I'm happy where we're at, we're fighting the good fight. That's what it's all about."