(CNN) -- A growing number of Americans believe John McCain has attacked Barack Obama unfairly, a negative perception of the Arizona senator that could cost him at the polls on Election Day. 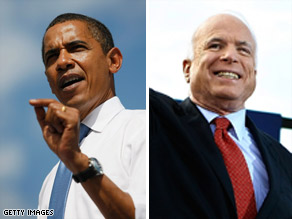 Americans say Barack Obama would be a stronger leader but John McCain has the edge in experience.

According to a new survey from CNN and the Opinion Research Corp., nearly six in 10 Americans believe McCain has unfairly gone negative in his bid for the White House. That percentage is significantly higher than it was in September, when just 42 percent thought the Republican presidential nominee was running an overly negative campaign.

It also is higher than the 39 percent of Americans who believe Obama has gone unfairly negative on McCain.

Obama also has a slight lead over McCain when it comes to who is considered a stronger leader, an advantage that McCain had long held over the Illinois senator and one that has been a chief talking point of his campaign.

In recent weeks, both campaigns have stepped up spending on negative television ads and launched attacks at each other's record. But comments from both McCain and running mate Gov. Sarah Palin questioning Obama's relationship with former 1960s radical William Ayers have drawn particular scrutiny.

Obama's image may also be benefiting from his huge financial advantage and the number of ads he is able to air compared with McCain. Obama can afford to produce positive and negative ads that could serve to soften his own image while hurting McCain's, Campaign Media Analysis Group's Evan Tracey, CNN's consultant on ad spending said.

"McCain can't afford the positive ads Obama can," Tracey said. "It's not likely McCain can raise his own positives with only a couple weeks left, but he can hope to raise Obama's negatives."

But the clear perception that the Arizona senator has run a more negative campaign than Obama may hurt the Republican presidential nominee's chances of a comeback as the end of the race draws near.

"In previous elections, both candidates have been viewed as attacking the other unfairly, so the penalty for doing so has tended to cancel out in past years," CNN Polling Director Keating Holland said. "But this year McCain faces that problem all by himself, so any blowback affects only him while Obama seems above the fray."

In what could be more bad news for McCain, the new CNN/ORC poll indicated that 47 percent deem Obama the stronger leader while 44 percent give the nod to McCain. That's a striking departure from a similar poll in early September showing close to 60 percent viewed McCain as the candidate with better leadership qualities.

"It's unclear what has changed the numbers on leadership," Holland said. "It's possible the cumulative effect of the debates had something to do with it. Debate audiences ranked Obama as the stronger leader after all three debates, and by increasing numbers as the debate season progressed."

Obama is also seen as having a clearer plan for solving the country's problems, and more voters say they would be more proud to call Obama president than McCain, 49 percent to 37 percent. The Illinois senator is also viewed more favorably than his White House rival: 63 percent have a positive view of Obama while 56 percent view McCain favorably.

But the Arizona senator continues to enjoy an advantage on the issue of Iraq and terrorism, and poll respondents believe by a 13-point margin that he has better experience to be president than Obama.

But on the most pressing issue, the nation's economic woes, Obama continues to hold nearly a 20-point advantage over McCain -- a chief reason for the Illinois senator maintaining a 5-point lead on his rival overall. That 5-point lead, however, is down from an 8-point edge in a poll conducted October 3-5.

The new poll shows a significant enthusiasm gap between members of each party. Even after the selection of Sarah Palin as the Republican vice presidential candidate -- a move that appeared to energize her party's base -- only about a quarter of GOP voters say they are extremely enthusiastic about voting this year. That's about half the amount of Democrats who say they feel that way.

The poll was based on interviews with 1,058 adult Americans -- 983 of them registered voters and 746 of them "likely" voters -- conducted by telephone Friday through Sunday.