WASHINGTON (CNN) -- Unlike in previous U.S. presidential elections of recent times, the battle for the White House in 2008 begins just a short drive west from 1600 Pennsylvania Avenue, across the Potomac River amid the commuter belt sprawl of northern Virginia. 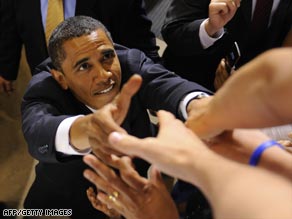 Barack Obama greets supporters at the end of a rally at the Richmond Coliseum in Richmond, Virgina.

With its Civil War battlefields and picturesque colonial towns, the self-styled Commonwealth of Virginia -- once home to both George Washington and Thomas Jefferson -- had seemed resigned to past glories; a quiet political backwater that has remained undemonstratively Republican in every presidential election bar one -- Lyndon Johnson won the state for the Democrats in 1964 -- since 1952.

As the gateway to the south and a bastion of small town America bolstered by a strong military presence clustered around the U.S. Navy's Norfolk base, Virginia is not supposed to be the sort of place where a liberal-leaning Democratic presidential candidate makes inroads.

Yet recent polling suggests Barack Obama has done that and more. CNN's latest poll gave Obama an 10-point lead over his Republican rival John McCain, an advantage that has seen the state's status adjusted from "toss up" to "leaning Obama" on CNN.com's electoral map. See how candidates are performing on our electoral map

Such a result, were it actually to occur on election day, would likely be a fatal blow for McCain and the Republicans.

Though Virginia's influence on the overall result is comparatively small -- the state carries just 13 out of the 270 electoral college votes needed to claim the presidency -- the significance of an Obama success would be clear: If McCain cannot even hang onto the Republican heartland, what hope does he have in genuine swing states such as Florida and Ohio?

"We win here, we win the presidency," Obama's vice-presidential running mate Joe Biden told a rally Saturday in Suffolk. iReport.com: What would you ask Sen. Obama?

Virginians' sudden outpouring of "Obamania" has not come entirely out of the blue.

Demographic analysts point to the growing influence of those solidly Democratic northern suburbs around DC -- home to around a quarter of Virginian voters -- which have diluted the rest of the state's conservative tendencies.

A Democratic governor, Tim Kaine, was elected in 2005, followed by a Democratic senator, Jim Webb, in 2006, suggesting an underlying dissatisfaction with the Republican status quo.

But Obama -- fueled by a record-breaking fundraising effort that saw $150 million raised in September alone -- has poured resources into the state, opening up some 70 campaign offices, compared to McCain's 21.

Grassroots voter registration drives have also added hundreds of thousands of names to the electoral roll, many of them assumed to have Democratic tendencies.

The Republicans show no sign of surrendering Virginia without a fight however.

Sarah Palin is due to swing through on Monday in an effort to rally spirits and mobilize supporters and the party will do its utmost to turn out the vote in areas it still controls to counter the anticipated Democratic surge. "We think we've got a great ground game. We've got people power," Susan Allen of Virginia Women for McCain told CNN.

In the final run-up to election day on November 4, I will be on the road in Virginia, checking the pulse and testing the mood of this key battleground state, attending the rallies and following the foot soldiers on both sides from doorstep to doorstep, speaking to highly prized swing voters and the pollsters trying to make sense of it all.

Look out for daily updates and blogs from the campaign trail as Barack Obama and John McCain vie for the biggest prize in world politics.