Small business owners not sold on the candidates 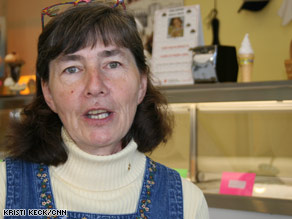 Both are looking for a president who will help mom-and-pop companies reach their goals, but their opinions differ on which candidate is best for the job.

Gibson runs Gibson's Goodies, a small ice cream shop in Wilmington, Ohio, that's been around since World War II. She leans toward Barack Obama because "he is looking at the middle class a little more so."

A 20-mile stretch of road decorated with more political signs than pumpkins stands between Gibson's Goodies and Francis Kennels. The kennel is housed in a large red building that looks like a barn and serves as a one-stop shop for grooming, boarding and obedience training.

The thought of voting for Obama does not sit well with kennel owners Mary and Steve Grech. They are both voting for John McCain, but only by "process of elimination."

"Barack Obama's whole 'I'm going to take from the rich and give to the poor' Robin Hood attitude ... I am very offended by that. It smacks of socialism, so it definitely won't be Barack," said Mary Grech, who works in Xenia, Ohio. Fact check: Obama's tax plan for small businesses

The Greches took out a second mortgage on their home in 2001 with hopes of starting a company where their employees could grow with them.

As their business has grown, so have their taxes, and the couple cannot afford to provide benefits for their employees. Grech works a second job just so she and her husband have health insurance.

For Gibson, health care is not an issue. Most of her employees are students, and they all work part time. She just wants to be able to create the environment she envisioned when she took over the company 18 years ago.

"I had huge dreams when I first took this over. ... My idea was to take it over and make it into a party palace for little kids," she said. "The dream has sort of gone on the back burner with the hopes that maybe some day it will turn into something like that."

As Gibson prepares for the lunch crowd, straightening the chairs at the shop's two tables and making sure the homemade ice cream is ready to be served, she talks about the struggles her town is facing. She chokes up at mention of the job losses that could result from the closure of the local DHL shipping center.

Gibson says she's not sure whether either candidate understands "what the little guy out here is going through." Obama, she says, at least had to "climb his way up the ladder."

Both candidates have been aggressive in their attempts to woo blue-collar voters -- especially in Ohio, home of Joe the Plumber, the unintentional star of the working class push. Fact check: Obama's conversation with Joe the Plumber

Ohio has 20 electoral votes at stake, and polls show Obama and McCain in a tight race.

But Gibson puts more faith in Congress than the promises of a presidential candidate.

"Their proposals are great, but I sort of take them with a grain of salt," she said. "I think they see the bigger corporations that are struggling ... but the everyday Joe, they don't see as much."

Mary Grech agrees with Gibson: She thinks both candidates are out of touch with what she and her husband go through.

"John McCain has said that he doesn't understand the economy, and I can see that," she said.

The Greches say their goal with Francis Kennels was to be able to give back to the community, something they do through pet adoption fairs and work with nonprofits. But their goal of proving health care for employees still seems far away.

"Every day, we read a little bit more where they're coming for more of the money that we have earned," Steve Grech said. "I never saw a state senator helping us lay the cement for this building. I never saw a representative in the back helping us pick up dog waste ... They never do that, but doggone it, they're here for their money without fail."