(CNN) -- Community organization ACORN is fighting back after allegations that it is trying to register voters fraudulently and to swing the presidential election for Democrat Barack Obama. 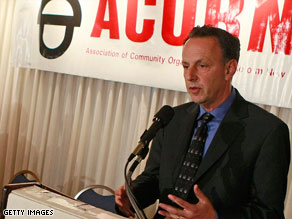 The group this week released a 30-second TV ad calling on Republican candidate John McCain to stop "attempts at voter suppression across the country."

It also said it was filing several lawsuits around the country to halt the alleged suppression.

Republicans have "challenged election officials, and they've filed lawsuits in an effort to thwart these new voters -- our citizens -- from casting their votes on Tuesday. This effort must be stopped," Delaware ACORN board member Hugh Alleyne said during a news conference Wednesday.

"In nearly every case that has been reported, it was ACORN that discovered the bad forms and called them to the attention of election authorities, putting the forms in a package that identified them in writing as suspicious, encouraging election officials to investigate, and offering to help with prosecutions," ACORN said in an October 9 news release.

The judge, Robert Simpson, said the Pennsylvania Republicans failed to convince him of the need for a preliminary injunction that would have required immediate action in the final days before the election.

The state GOP accuses ACORN of widespread fraud in helping register some 140,000 voters in Pennsylvania.

The top lawyer representing the Pennsylvania Republicans said they were "disappointed." But, Heather Heidelbaugh added, the wording of the court order indicates the judge thinks ACORN has problems.

Simpson said he would favor "expedited discovery" should someone want to pursue "evidence that in Pennsylvania practices of ACORN Outreach Workers can encourage duplicate voter registration."

In Lake County, Indiana, nearly half of the 5,000 registrations ACORN submitted in early October were not good.

Indiana's Republican Secretary of State Todd Rokita has requested a criminal investigation, and federal law enforcement officials are considering whether to open a federal investigation based on state reports.

During the October 15 presidential debate, McCain said ACORN "may be destroying the fabric of American democracy."

Officials for ACORN -- which stands for Association of Community Organizations for Reform Now -- calls such statements hysteria, but acknowledge that some of their hires have turned in improper voter registrations.

On its Web site, the group contends that those employees were lazy and didn't want to work for their pay, making ACORN, not the public, the victim.

Those workers have been fired and some even prosecuted, and the false registrations have not led to voter fraud, the group contends.

"Even the general counsel of the RNC [Republican National Committee] has acknowledged that he cannot cite a single example of an improper vote having been cast as a result of alleged voter registration fraud," ACORN Executive Director Steve Kest said.

Former Ohio Secretary of State Ken Blackwell, who headed up President Bush's 2004 campaign in Ohio, has said that Obama once was an organizer and trainer for ACORN.

Obama's campaign says that's not true. As an attorney, Obama represented ACORN alongside the U.S. Justice Department in suing the state of Illinois to force state compliance with a federal voting access law, the campaign's Web site says.

And ACORN was not involved in Project Vote, a voter registration drive that Obama ran in Illinois in 1992, according to the Web site.

ACORN, founded in 1970, calls itself "the nation's largest grassroots community organization of low- and moderate-income people." It says it has more than 400,000 member families organized into more than 1,200 neighborhood chapters in 110 cities.

Besides voter registration, the group focuses on issues such as predatory lending, minimum wage and funding for public schools, according to the Web site. It also provides free tax-return preparation for low-income people and screening for state and federal benefit programs.

Republican hostility for ACORN goes back a long way. Former U.S. Attorney David Iglesias said the Bush administration fired him and eight other federal prosecutors in 2006 for political reasons, among them his refusal to pursue election fraud charges against organizations like ACORN.

"It's easy to make accusations, but ultimately a prosecutor has to prove that case beyond a reasonable doubt in federal court," Iglesias said.

Officials with the McCain campaign maintain that the dumping of thousands of phony registrations on local election boards makes it harder for those boards to do their job, opening the door to voter fraud on Election Day.

CNN's Carol Costello and Paul Courson contributed to this report.