Schwarzenegger pumps up support for McCain 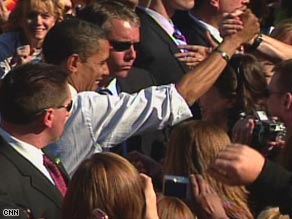 The GOP governor introduced McCain at the rally, said the Arizona senator "is built like a rock" and called him a "real action hero."

Meanwhile, Obama told supporters Friday that they were poised to end the politics of division on Election Day.

Returning to the state that was the springboard for his presidential campaign, the Democratic presidential nominee told supporters in Des Moines, Iowa, "We are four days away from bringing change to America."

"In four days, you can put an end to the politics that would divide a nation just to win an election; that tries to pit region against region and city against town, Republican against Democrat; that asks us to fear at a time when we need to hope."

"In four days at this defining moment in history, you can give this country the change we need, Iowa," he said.

In January, Obama scored an upset victory by capturing 38 percent of the vote in the Iowa caucuses, topping both John Edwards and Sen. Hillary Clinton, who was at the time considered the front-runner in the Democratic presidential contest.

Partially due to the support he developed during the caucuses, Obama has maintained a commanding lead in Iowa throughout the general election season. The latest CNN poll of polls in Iowa shows Obama leading McCain by 12 points, 52 percent to 40 percent.

Watch a debate on whether the polls can be believed »

Nationally, polls show that Obama is leading his Republican rival, Sen. John McCain, going into the final weekend of campaigning.

A CNN poll of polls calculated Friday has Obama leading McCain 50 percent to 43 percent, with 7 percent unsure. The poll of polls is an average of eight national surveys.

Trailing in the polls, McCain will travel to seven states in one day as his presidential campaign enters its final hours, the Republican nominee's campaign manager announced Friday.

McCain will campaign in seven cities Monday, just one day before Election Day, Rick Davis told reporters in a conference call. The final list of cities has not been finalized, Davis said.

McCain and the Republican Party expect to outspend Obama's campaign by $10 million in the closing days of the campaign, he said.

As part of its final push, the McCain camp announced Friday it is airing a new ad, titled "Freedom," which has McCain talking directly to voters about his plans to grow the economy and cut waste.

In the ad, McCain tells voters, "Don't hope for a stronger America. Vote for one."

The Republican nominee will not spend all of his final weekend campaigning on serious matters. McCain plans to make an appearance on "Saturday Night Live." He has appeared on the show before, but this weekend will be his first appearance this year.

In a sign that the Democrats were not going to sit on their lead, the Obama campaign announced Friday that it would begin airing ads in McCain's home state of Arizona.

Watch how Obama is keeping up the pressure »

The latest CNN poll of polls in Arizona, released Friday, finds McCain leading by 4 percentage points in the state, which he has represented in Congress for 25 years.

"If someone else had been the Republican nominee, it would have been a core battleground like its neighbor Western states," Plouffe said, adding, "Our internal data suggests this could be a very, very close race."

Plouffe also said the campaign was going back on the airwaves in Georgia and North Dakota with its negative advertisement, "Rearview Mirror," which ties McCain to President Bush, who won both states in 2000 and 2004.

A McCain spokesman dismissed Obama's advertising in Arizona as a "waste of his resources."

Predicting that he will close the gap in the polls, McCain began a two-day bus tour across the must-win state of Ohio on Friday.

At the first stop on the tour, McCain touted his plan to use a portion of the $700 billion financial bailout package passed by Congress to buy up the mortgages of distressed homeowners so they can "stay in their homes."

The Arizona Republican must win Ohio's 20 electoral votes to have any chance of becoming president, and recent polls suggest that McCain is going into the campaign's final weekend behind in Ohio.

The CNN poll of polls in Ohio calculated Wednesday indicates that Obama has an 8-point lead in the state, with the Illinois senator ahead of McCain 50 percent to 42 percent, with 8 percent unsure.

No Republican has ever won the presidency without winning Ohio.

Watch how the campaigns are starting their final push »

Despite being behind the polls, McCain on Friday expressed confidence that the tide was turning in his favor.

"I want to tell you the enthusiasm and the momentum that I feel here in Ohio is going to carry us to victory here in Ohio and throughout this country," McCain told supporters.

Watch analysts weigh the state of the race »