(CNN) -- When the stirring speeches, heavyweight debates and fevered campaigning of the U.S. elections are long forgotten, a handful of far less noble incidents are likely to be our enduring memories of the 2008 White House race. 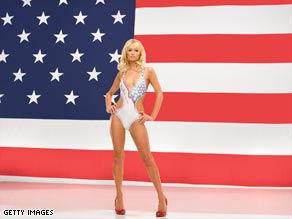 "Hey America, I'm Paris Hilton and I'm a celebrity too."

While the candidates would like us to view their bids for the top job as an honorable battle of wits, policies, values and big issues, the sad truth is that it's more likely to boil down to a list of gaffes, embarrassments and sideshows.

Both Democratic and Republican PR machines have been working hard to keep their campaigns on-script, but with a cast list of John McCain, Barack Obama, Joe Biden, Sarah Palin and the Clintons, they had their work cut out.

Alaskan "hockey mom" Palin's late arrival undoubtedly stirred things up, adding a dash of vigor as the race lumbered into its final straight, but even before she began stealing the show, there was no shortage of scrapbook moments.

Sound off: Which do you think are the most memorable moments from the 2008 election?

In no particular order, here is a selection of some of the best:

1. Crying game: Back in January's New Hampshire primaries, Hillary Clinton welled up with emotion, almost crying into her coffee cup during a chat with voters. This unexpected exposure of her human side was credited with winning back some women supporters. Read more

3. Pastor disaster: Proving once again that religion and politics don't mix, Barack Obama was forced to distance himself from his former pastor and mentor Jeremiah Wright, after a series of pulpit fulminations in which he made racially-charged criticisms of Hillary Clinton and said of the 9/11 terror attacks: "American's chickens are coming home to roost." Read more

4. Ramblin' man: Garrulous "gaffe machine" Joe Biden got the last word in a primary debate about his tendency to speak his mind and not shut up. Asked if he could hold his tongue enough to "reassure your voters in this country that you have the discipline you would need on the world stage," Biden replied succinctly: "Yes." Read more

5. The pig issue: Obama may have been hoping to generate oinks of outrage when he commented in September that McCain's policies were like "lipstick on a pig," after the Arizona senator named Sarah Palin as running mate. The Democratic candidate refused to apologize for what Republicans said was a misogynistic response to Palin's own claim to be a pitbull in lipstick. You couldn't make it up. Read more

6. Miss-firing: Hillary Clinton had her campaign guns blazing in March when she described the drama of a visit to Bosnia 12 years earlier. "I remember landing under sniper fire," she said. Clinton was later forced to admit "misspeaking" after video footage of the event showed her strolling leisurely from the aircraft. Read more

7. Ordinary Joe: First there was Joe Biden, then there was Palin's mythical beer swiller Joe Sixpack and finally there was Joe the Plumber -- just a regular guy worried about his business going down the drain. Despite not actually being a licensed plumber, and not even being called Joe, he has been seized on by McCain as an everyman hero. This endorsement sprung more leaks when Joe failed to appear on cue to a recent McCain event. Read more

8. Bad business: Neither presidential candidate makes claim to being psychic, but McCain might have done better consulting his tea leaves rather than the advisors who led him to say "the fundamentals of our economy are strong" on the eve of America's worst financial crisis since the Great Depression. Read more

9. Palintology: Her political skills aside, moose-shooting Sarah Palin has been an unfortunately prolific headline generator for the Republican campaign, whether eyeing Russia from her Alaskan home, shopping for suits, stumbling over questions from Katie Couric or introducing her pregnant teenage daughter. Read more

10. Barack=Britney: Celebrity endorsements are one thing, but McCain's campaign ad comparing his rival to pop star Britney Spears and heiress Paris Hilton was seen by at least one person as taking things a little too far. A swimsuit-clad Hilton responded by launching her own campaign for the presidency: "Hey America, I'm Paris Hilton and I'm a celebrity too. Only I'm not from the olden days and I'm not promising change like that other guy. I'm just hot!" Read more