(CNN) -- Democrats increased their 36-seat majority in the U.S. House, according to CNN projections, by defeating established Republicans and winning open seats as they capitalized on an unpopular GOP president. 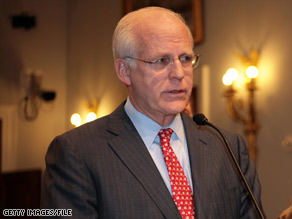 Democrats clinched a majority and took at least 21 seats from Republicans, with the GOP taking only four from the Democrats, according to CNN projections as of 4 a.m. ET Wednesday.

With winners yet to be called for 11 of the House's 435 seats, Democrats were projected to win 251 seats, with Republicans having 173.

Heading into Election Day, the Democrats had a 235-199 majority. The Democrats' apparent gains Tuesday come two years after they took control of the House -- with a gain of 30 seats -- after 12 years in the minority.

Among Tuesday's GOP casualties was longtime Rep. Chris Shays of Connecticut, whose reputation for occasionally bucking his party couldn't keep him from losing to Democrat Jim Himes.

Shays' defeat leaves New England without any Republicans in the House. Shays was seeking his 11th full term.

House Speaker Nancy Pelosi, D-California, said Tuesday night she was confident Democrats would ride a "wave" of pro-Democratic sentiment across the country and add to their House majority, though she declined to predict by how much. Watch Pelosi say Americans voted for change

"We have surfers to ride that wave," Pelosi said at the Democratic National Committee headquarters in Washington, where she was watching election results.

Here are highlights of other races with projected winners:

• Democrats gained at least two seats in Ohio, including that of Rep. Steve Chabot, who was seeking an eighth term in a Cincinnati-area district that normally votes about evenly for GOP and Democratic presidential candidates.

• Freshman Rep. Michele Bachmann, R-Minnesota, was projected to survive a race that tightened after she made comments about Sen. Barack Obama last month. She was leading Democratic challenger Elwyn Tinklenberg 47 percent to 43 percent with 86 percent of precincts reporting.

Bachmann set off a storm of criticism in October when she said Obama's connection to 1960s radical William Ayers made her concerned that Obama may have anti-American views. Bachmann's comments prompted a flood of fundraising for Tinklenberg.

Mahoney already was going to have a tough race in his Republican-leaning district. But the race became tougher in mid-October with allegations that Mahoney had an affair with one of his aides and paid her thousands of dollars in hush money.

Mahoney admitted to causing "pain" in his marriage, but he denied paying the aide to keep quiet.

• The House's third-ranking Republican, Rep. Adam Putnam of central Florida, was re-elected but wrote to his colleagues Tuesday night that he wouldn't run again for a leadership post, saying he wanted to return his focus "to crafting public policy solutions for America's generational challenges." He is currently the GOP conference chairman.

Tubbs Jones, who represented the district that covers parts of Cleveland and its suburbs, died in August after brain hemorrhaging caused by an aneurysm.

• The House's first two Muslim members, Rep. Keith Ellison of Minnesota and Rep. Andre Carson of Indiana, won their contests Tuesday. Carson has won his first full term; he had succeeded his grandmother, the late Rep. Julia Carson, in a March special election.

Not all 435 seats will be decided immediately. Two Louisiana districts used Election Day for primary run-offs; the general election for those seats will be December 6.

All About U.S. House of Representatives • Democratic Party • Republican Party