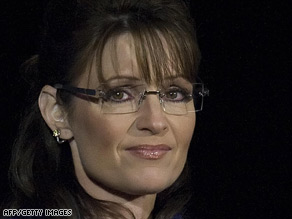 Palin, at McCain's concession Tuesday night, boosted the GOP ticket at first but ultimately became a drag on it.

Palin had been unfamiliar to most Americans, aside from some conservative writers and bloggers, who had admired her since she upended Alaska's Republican establishment by knocking off incumbent Gov. Frank Murkowski in 2006.

That all changed on August 29 -- the morning after Sen. Barack Obama's acceptance speech at the Democratic National Convention -- when Palin was introduced by McCain.

It wasn't just reporters who were stunned. Even McCain staffers at the event itself were shocked. Many assumed McCain would tap a GOP heavyweight like Mitt Romney or Tim Pawlenty. The most daring option, many thought, would be Joe Lieberman, a former Democrat.

See Palin's path to the ticket »

But Palin's debut instantly energized the Republican base, which had long been cool to McCain, and the GOP ticket surged in the polls.

McCain took a shine to Palin's anti-establishment streak and her familiarity with energy issues. His advisers believed her "average hockey mom" persona would attract women. The party grass roots admired her devotion to family and her conservative positions on social issues.

But because the Alaska governor was largely unknown, her record and background were immediately under scrutiny. Journalists descended on her hometown of Wasilla to examine her record as mayor and governor, though Palin was still sheltered from questioners.

The craving for knowledge spread outside the media and paid huge dividends at the Republican National Convention, when Palin took the biggest stage of her life and assuredly presented herself as both a small-town mother of five and a pit bull who could smile her way through a sharp political attack. The speech garnered mammoth television ratings and rave reviews.

McCain came out of the convention with a healthy bounce -- leading Obama by a 10-point margin. Palin's ratings were also riding high, with nearly 50 percent of Americans viewing her in a positive light. She got bigger crowds than McCain, an unusual phenomenon that underscored her newfound political clout.

But a series of missteps began to harm her image and McCain's standing.

Palin was still kept away from the media, even friendly conservative talk radio shows, in a strategy that campaign aides later acknowledged was flawed. Advisers chose to grant interviews only to two networks. When Palin stumbled over foreign policy questions, she undercut the foundation of McCain's experience argument. Her sometimes-rambling answers in the highly-scrutinized appearances formed the basis for Tina Fey's "Saturday Night Live" caricature.

Palin held her own on economic and energy issues in the first half of her debate with Joe Biden -- the highest rated of the presidential and vice-presidential debates. But when questioning turned to national security, she seemed to resort to talking points.

Back on the stump, Palin began to attack Obama, accusing him of "palling around with terrorists," being a socialist and not as patriotic as herself and McCain.

Her offensives were often scattershot, appearing at one rally and disappearing at the next. And while Republicans enjoyed the aggression, Democrats and independents were turned off.

Over a month, poll numbers shifted and Palin became more of a polarizing figure. Liberals called her the most divisive politician since Richard Nixon or George Wallace, and some former Hillary Clinton supporters said McCain's selection of Palin was a cynical gambit that wouldn't help him sway female voters.

Palin kept up her rigorous campaign schedule but the problems continued.

A long-running ethics investigation in Alaska determined she abused her power in firing the state's public safety commissioner, though she broke no laws.

News broke that the Republican National Committee had spent $150,000 on her wardrobe, angering her and prompting her to deviate from the campaign's game plan. iReport.com: What's next for Palin?

Aides insisted Palin wanted to speak to reporters but had been reined in. That changed in mid-October when she ditched her staff and launched an impromptu press conference in which she criticized the use of robocalls, even as they were being used for her boss.

Later she ad-libbed a diatribe on the wardrobe fiasco, stressing a preference for consignment-store clothing and flashing her $35 wedding ring.

McCain aides refused to go on the record about it, but they groused anonymously that Palin was "going rogue," that she was a "diva" and "difficult" to work with.

In the final two weeks, Palin was at last given a chance to make in-depth speeches on substantive issues like energy and special-needs children.

But the tide had long turned. An NBC News/Wall Street Journal poll in October showed she had become a bigger drag on McCain than President Bush, with voters citing her qualifications as their primary concern.

A CNN poll released last weekend showed Palin's unfavorable ratings were twice as high as when McCain picked her, and 57 percent of Americans believed she didn't have the personal qualities a president needed.

As for the future, the poll indicated that only four in 10 voters would support Palin if she chooses to run for president in 2012. But Palin's fortunes have changed before.